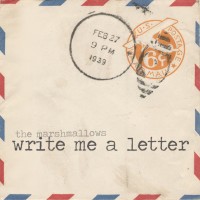 Perhaps what sets the Marsmallows apart from their contemporaries is their brutally simple, yet brutally biting lyrics. Right away "Write Me a Letter" starts with the dismissive "Don't write me a letter / Tellin' me that you think you're better / Don't write me another song / It's been done before and better." OUCH. Not only do the Marshmallows tell a former lover that he's old hat, but they snap him down by telling him he's not even that good at revenge. Yow. What makes the line so powerful is that it's honest, yet not necessarily trying to be deep, but in its simplicity it gives more details than an entire book. That is not an easy feat.

The use of the sparse is continued to the instruments as well. Again relishing in the simple, the group takes hold of the early bluntness of punk and also snatches the reserved, distanced look from early post-punk. The whole song is built around a single angular riff that never gets wild or breaks into a solo, but rather, slowly increases in a cold burning intensity until the end when the vocals call out "When it's over, it's over/ And that's it." The harsh words are compounded by the sweet cooing of the trio in the background. A little bit Andrews Sisters, a little bit Ronettes, the girls create an extremely inviting sound that when contrasted against the cold instruments and biting words, almost come off as mocking refrains instead of inviting calls.

The Marshmallows haven't released a ton of songs yet, but with songs that are this sharp that sound so smooth, they don't need to. Put this bad boy on a 7".