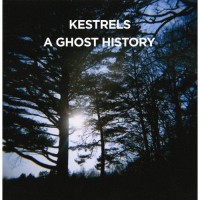 With an ethereal vibe liken to the Appleseed Casts' Low Level Owl era, Kestrels' A Ghost History trudges along with depressing clamor and blatant reverb like a grunge-infused Wavves. The low fidelity of the guitar tones screams "I don't give a shit" from a garage, with obscure sensibilities that incorporate the weight of collective thought misunderstood and marginalized.

There's a hands off malaise that employs a romantic sense of unrequited love for the previously eager self. Where the timing and anemic delivery dawdles around like a kid on his way home with a bad report card, the occasional third act guitar solo blasts through emphatically, revealing the secret pleasure of discarding institutional judgment, sacrificed for a more passionately unearthly use of time.

Rather, it's the shoegazed memory of the latter, recalled through a dusted narrative. It's not about the stock of a printed book's pages, or the typeset, or the binding style–it's about the content: the arrangement of the expansive number of minute details coalescing thematic imagery, language and the sort of intellectual context that conjures a style all its own.

Seemingly taking cues from Andrew Savage's work in Teenage Cool Kids, Chad Peck is at work on something refreshingly different with Kestrels, something beyond the casual grasp of even the most serious audiophile. When most people strive to keep their head above water, and an artist raises their head above the clouds, Kestrels' collective genius lands somewhere beyond all of that, in the tranquility of space or the ethereal plane of the heavens. They dutifully cast a soundscape reminiscent of a forlorn love that emerged from Seattle grunge, yet nods to the emotional movements of the Midwest, and the cooler-than-thou reverb sounds of beach-fused Pitchfork rock. What emerges is a distinctly contemporary, emotive work of modern art.

Despite the obtuse and unrecognizable objectives of albums like Teenage Cool Kids' Foreign Lands, Kestrels take a more accessible exhibitionist approach, allowing for us on Earth to see them way up and out there. With A Ghost History, not only do Kestrels share their otherworldly vision, they lend their hand down.