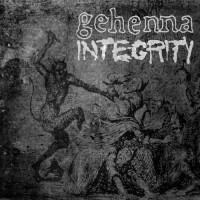 At least three things have always separated Integrity from their metalcore contemporaries. First, Integrity, in lieu of metaphor, have used the occult and religious imagery as literal tools instead of conceptual. Second, Integrity are willing to go full on metal when the mood dictates–not metal-influenced hardcore, not extreme metalcore, but straight up, gothic Judas Priest-style '70s metal. Third, Integrity, moreso than their ilk, have been willing to try weird experiments no matter how they may seem. "I Know Where Everyone Lives" exhibits all three of these qualities, which in turn, exhibits why the band has managed to exist for some 25 or so years.

"I Know Where Everyone Lives" finds vocalist Dwid Hellion recounting tales of being a damned soul and existing as an accursed creature with reference to Bram Stoker's Dracula. While that might seem cheesy at first, Hellion is so dedicated to the concept, and delivers his growl with such a deep, bellowed call, he makes the fantastic seem very real. This is supplanted by the goth-metal guitar that weaves throughout the song. With vague references to Stained Class-era Judas Priest, the song sets a minor chord tone that creates an equal amount of dread and eloquence. Daringly, the song eschews traditional song structure, starting with a short solo, before building into a riff, and then finally snapping into a thrash attack before abruptly ending. It keeps the listener on his toes and forces him to try to make sense of what he has just heard and what the hell Hellion is talking about. In other words, the song is an encapsulation of the band itself.

Gehenna, the newcomers to the split, play death-ish metal, with lumbering riffs and unintelligible growl vocals. Still, the band keeps the well worn genre interesting by echoing some of Integrity's tendencies. First, both songs on the Gehenna side completely eschew normal structure. While the songs are based around downtunned massive riffs, the tempos and riffs change on the tip of the dime, giving the side an almost jazz-like ambiance of structured chaos. Lyrically, the band is equally interesting. "A Parallel Hell" is a companion to Integrity's side, with the band casting themselves as creatures of the damned and in doing so, find themselves free of mortal confines and pressure. But then, just as it seems the split will be entirely Biblical, Gehenna cuts "Amphetamine Psychosis" that goes into disturbing detail, describing a meth trip. Completely abandoning Biblical imagery, the song is as strange as it is interesting. It's not often that extreme metal covers such earthly concerns. It's not easy listening, but if one can wade through the nasty waters, there is terrifying wonder at the bottom of this black sea.