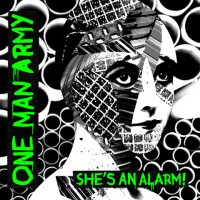 A brief, abridged, and overly simplified history of One Man Army for those who are yet unfamiliar with the seasoned San Francisco trio:

Formed in 1996. Released the classic street punk debut Dead End Stories in 1998 on Billie Joe Armstrong's Adeline Records. Did some touring and followed it up with 2000's Last Word Spoken. Put out some EPs here and there on Fat Wreck and TKO. Did some more touring. Released one of the greatest punk records of the decade in 2002 with Rumors and Headlines on BYO. Recorded a live DVD. Dropped an incredible split with tourmates Alkaline Trio (both sides are great). Broke up.

In the years between 2005 and 2012 without One Man Army, lead singer Jack Dalrymple co-fronted Dead to Me for two releases, toured with the Swingin' Utters and joined Utters side project the Re-Volts. But while these endeavors provided partial satiation for those longing to hear Jack's trademark howl, it wasn't until news of One Man Army's heroic reunion spread to fully revive the excitement fans have yearned for.

So does the four-song EP She's An Alarm live up to expectations after seven years of absence and a return to Adeline Records? In a word: Abso-freakin'-lutely. However, that's not to say it's exactly what was expected. For one, the whole thing has quite a garage-y feel, even more so than their split with Alk3, up until now the band's final offering. And it's not just the choppy guitars that proliferated on the previous release, as Dalrymple's vocals in both "Plastique" and "Any Minute" are run through some moderate distortion but don't at all sacrifice catchiness for aesthetic. "Plastique" almost sounds like it owes a bit to the Briefs (or more likely, the bands that influenced the Briefs) with its pogo-punk pace and B-movie social commentary: "We walk to a beat with caustic eyes / We recycle and repeat (repeat, repeat, repeat, repeat)."

The record's opener, "I.T.I.A.L.S.," showcases Dalrymple's sweetly strained voice above background croons and some machine gun guitars that break briefly to fall on the upbeat like an inverted ska rhythm. On the opposite side, "I Got Hung Up" achieves mostly the same successes, with Dalrymple's vocals shining, sandwiching a few bars of surf guitar and a gorgeous, ornate bridge and chorus combination.

Every song on She's an Alarm is a winner, and the band sounds completely in stride even after a seven-year layover. This EP is about as close to flawless as four songs can be, and one can only hope it's a sign of further great things to follow from One Man Army.

Jello Biafra and the Guantanamo School of Medicine: Live in Oakland