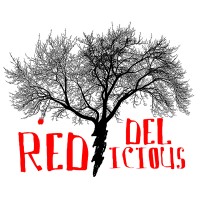 Everything about Red Delicious' new EP is retro, from the cassette format to the agreeable, catchy indie pop that recalls Lemonheads and Juliana Hatfield. And there is nothing wrong with that. With Evan Dando taking his sweet time following up Lemonheads, somebody's gotta put some good, unfuckwithable tunes out into the world.

"Rust" kicks off the collection, instantly setting the mood. It's a solid alt rock tune; a little twangy and certainly poppy. Co-vocalists Jamie Rowitsch and Eric Ellman complement each other nicely, perhaps owing to the six months they spent together away from songwriting before pursuing a new musical project. Whatever the source, "Rust" is a peppy number, and a sign of things to come.

The other four tracks all have a similar flow and energy, and never overstay their welcome. The goal of the band was stripped down, simple arrangements, and that's something they've pleasantly achieved. A track like "Hearts on Fire" clocks in at under two minutes, but it doesn't need to do much more beyond that. It's crammed with hooks ân' a pretty guitar solo already.

While these songs have been sitting the Rowitsch and Ellman's pockets for a little bit, they're finally actively touring, which should make for more good times.