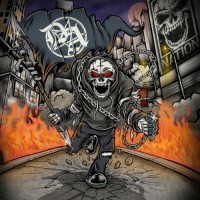 According to Wikipedia (the standard for investigative journalism) Dr. Acula formed in 2005. Taking their name from a Mitch Hedberg joke the band initially played joke songs. Where Wikipedia seems to falter factually (*gasp*) is its assertion that the band dropped this gimmick, in favor of writing genuine songs. It's not that the band's latest offering, Nation, doesn't seem heartfelt and legitimate. The album art looks not unlike an Iron Maiden cover (the most serious of bands) and with track titles like "Areola 51" the mind can't help but ponder what brilliance lies inside. Indeed, the perceived lack of reverence or maturity doesn't stem from their flawless aesthetic but rather in their seeming disinterest in putting out a record with anything that would warrant it be taken seriously as music.

Nation starts seriously enough, with an intro ominously titled "Be Careful What You Wish For." The track has a public service style announcement that warns, "We know that in the early years of 21st Century, this world was being watched by intelligences greater than his own and yet as mortal as man." This sets up the flow of the album, where each track/skit is linked, sometimes by similar announcements, sometimes by background noise. The key benefit to this is allowing the listener to subtly forget where they are in the album, which is nice since all the tracks sound the same. It's possible that Dr. Acula did this intentionally to allow the listener to focus on their lyrical wit rather than their music (much like Flight of the Concords, when they play as a duo). The lyrics dance like a play on every contrived metal act you ever heard. The band treads on lightly clichÃ©d lines like, "You made your bed so motherfucker lie in it," ("Keep on Running in Place") but really cuts loose with confounding phrases like, "I don't fucking belong here / I couldn't give half a dick who you are" ("Dressed for Transylvania In the Boiling Weather (Lipstick Guys)"). The entire piece resonates with such tough guy hardcore that offering "half a dick" seems less like a measure of concern and more like an inability to become sexually aroused.

This leaves us at an impasse. Wikipedia, the band and their label all claim Dr. Acula seek to make legitimate music that combines "grindcore, hardcore, metal and hip-hop." The facts stand in stark contrast. The band's musical talents are marginal (at best), while their lyrics are a muddle of conflicting and confounding shouts and put together in a manner that reeks of tired, well worn conventions. But perhaps, the answer lies far beyond that. Looking at the title of their latest endeavor many will instantly think of political comic/host Stephen Colbert (who each night address his audience with, "Nation, [insert monologue]").

Colbert has made a living not just crafting political jokes, but indeed living them. He has become the embodiment of a conservative stereotype and thus uses his image to expose hypocrisies and falsehoods in the conservative party and ideal. It is not inconceivable that Dr. Acula has crafted themselves as the "Steven Colbert of horrible music." Colbert frequently sites his distrust of government, despite being a political pundit. Dr. Acula seem unable to play music, despite being a band. Colbert makes nonsensical remarks such as, "If our Founding Fathers wanted us to care about the rest of the world, they wouldn't have declared their independence from it." Dr. Acula writes nonsensical gibberish like, "Confused illusions of a road less traveled / Unraveling injustice on an ignorant killing spree." Colbert tends to maintain his persona (right down to the uber-typical conservative dress), even when testifying before Congress. Dr. Acula maintains their tough guy persona (complete with neck tattoos and stern looks) and at all times. With so many similarities, it is quite possible that Dr. Acula have crafted the most impressive commentary on boring hardcore music in years. A band that has infiltrated the scene they seek to comment on and done so with such conviction, they have gone by completely unnoticed by all.

Or they're just really fucking bad at music.