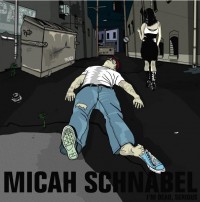 Two Cow Garage has always had a couple of noticeable strengths. Key among those is excellent lyrics and the ability to play some cacophonous rock music when the situation calls for it. This may be one of the reasons Micah Schnabel's (Two Cow Garage's co-frontman) solo debut When The Stage Lights Go Dim felt a bit flat. While Schnabel brought his trademark nasally rasp and strong narrative voice, he brought little else but an acoustic guitar. Sure there were a few flourishes (the piano on "God and Money" or the violin on "Cut Me Mick"), but as a whole it felt less like "stripped down rock" and more like "demos of some really good songs." With his second album, I'm Dead, Serious, all the best parts of Schnabel are back and this time he's brought some friends to play.

The first three seconds of I'm Dead, Serious showcases exactly how much has changed, as it opens with a drum fill and keyboards, leading into guitars, before Schnabel even says a word. Where When The Stage Lights Go Dim tried to rely on the intimacy created by a singer and a guitar, I'm Dead, Serious utilizes everything at its disposal to craft a world that Schnabel fills with characters who are equally intricate. It's easy to draw comparisons between the music of I'm Dead, Serious with Schnabel's earlier work with Two Cow Garage, but the difference is that on this release Schnabel (and his band of musicians) never push the music over the limit. Two Cow Garage tracks like "Bastards and Bridesmaids" or "The Great Gravitron Massacre" push the vocals to a near shouting level, every element collides grabbing for your attention (this is a good thing, promise). On I'm Dead, Serious the music never pushes into the foreground, it remains the lush setting for the stories, which are always a strong point for Schnabel.

Over the years Schnabel has tackled everything from carnival disasters and the morning after to death and the humor that surrounds it. Schnabel has a way of writing about life that is not only relatable but highlights the inherent humanity of his subject. Schnabel seems to accomplish this by keeping his subjects grounded in the world he knows. Even on the heartbreaking "Sid and Nancy" Schnabel refrains from inane sentimentality and instead opts for a chorus of, "Throw the TV out the window, set fire to the halls / Smash all of our records, kicking holes in the walls / Be beautiful and tragic like some Leonard Cohen song, we'll never hear / And that's the way I want it my dear." It's a subtle move but Schnabel openly opts to simply conjure the image of Cohen, rather than opt to pen the words that would inhabit this non-existent song. Schnabel is the folk song poet who pays homage to his musical heroes, while himself striving to be that hero to others. Used improperly these techniques can come off as cheap (why listen to someone who merely utilizes better artists?) but Schnabel always crafts these aspects into his narrative, using them to express feelings where needed and expounding on them (sort of an homage versus a straight reference).

In the end I'm Dead, Serious is what Micah Schnabel does best, craft great narratives that are insightful, clever and honest. This time, however, it's accompanied by a fitting backing track. In 11 tracks Schnabel can make you laugh one minute and choke on that very laughter the next and that is a good thing (promise). While Schnabel has always been great at telling a story, he now has a stage, lighting and background to go with the plays he has written.

Riverboat Gamblers: The Wolf You Feed