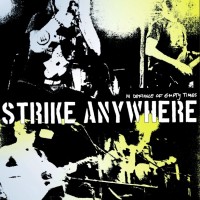 Among hardcore/punk bands, Strike Anywhere has arguably some of the strongest, most passionate lyrics. A lot of hardcore lyrics can sound like a mad man's rantings, but frontman Thomas Barnett's words ring with a conscience that calls to action on a local, national and global scale. In other words, even if they unplugged and lost all the sweet, sweet bashing ân' crashing, their songs should still get their points across without sacrificing anything. And for a while, that's true on new live/acoustic album In Defiance of Empty Times, but the release eventually comes undone due to iffy recording quality.

Consisting of two benefit shows for Industrial Workers of the World, In Defiance is divided in terms of quality. The first set, recorded in Rochester, N.Y., sounds great. Like you're sitting there listening to Barnett fire off lines while guitarists Matt Smith and Mark Miller strum and sing along. The trio adapts the material a little bit to help it translate, and while that means occasionally slowing down the songs, it also allows for a greater sense of melody to come through. They drop some choice cuts from Exit English and Iron Front, plus old tune "Chorus of One." This is the good stuff, even if bum track "Hollywood Cemetery" is thrown in too.

The second set, from Richmond, Va., isn't quite as good. The setlist is still killer ("Timebomb Generation," "Sunset on 32nd Street") but the quality eats shit. The Rochester songs sound professionally recorded; the Richmond stuff sounds like a bootleg. If I understand the liner notes correctly, these tracks also took way more effort to master because they sound like farts. You can tell it's a good show based on crowd reaction (dig how the fans drown out the band during "Sunset"), but the energy just doesn't come out.

Perhaps meant as a holdover until their next proper full-length, In Defiance of Empty Times is a mixed bag that might have gone over better as an EP.

Morning Glory: Poets Were My Heroes