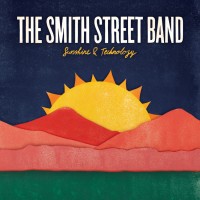 The Smith Street Band hail from Melbourne in Victoria and you damn well tell these lads are Australian. The enigmatic frontman Wil Wagner sings with such passion and strength that you can't help but be sucked into their own recipe of poppy folk punk. Often I'll look for other bands to compare an artist to but their sound is so original it's hard to do, maybe Against Me!, no not AM! although I'd say that there is some frequent rotation of The Eternal Cowboy in the touring van.

Sunshine & Technology is the band's second album but it feels as if it could be their tenth. The follow up to 2011's No One Gets Lost Anymore and the South East Facing Wall 7" (available for free at their Bandcamp page) from the same year is nothing new from these guys, but it doesn't need to be. They're so accomplished at what they're doing from the catchy hooks to Wagner's thick Australian vocals that it almost seems as if there is no room for improvement.

"I Want Friends" is a great song and epitomizes Wagner's approach to songwriting; he sings what he knows. He writes about friends growing up and how he doesn't want toâ"It's all fucking meaningless," he writes about how he sees the worldâ"The only thing you can not buy is time." He'll let you know how he feels: "I want friends who don't give a fuck again!"

A change in tone is evident in "Young Drunk." It feels sadder but still in your face; how they pull this off I don't know, maybe it's the acoustic intro and the line "One day there will come a time when the person you were named after dies and all of a sudden you're the only one left." And then all of a sudden he's in your face with "Tonight I'm getting young drunk" and "I can make as much noise as I want!"

With their intense touring of Australia and upcoming set at the Fest 11, as well as Frank Turner claiming to be "absolutely obsessed" with them, it's only a mater of time til everyone you know is telling you about the Smith Street Band. A great record for fans of previous releases from these lads and anything with a bit of passion in it. Spanning genres from pop to punk to straight up Aussie rock with a touch of that touring troubadour folk sound, Sunshine & Technology is one for the ages.