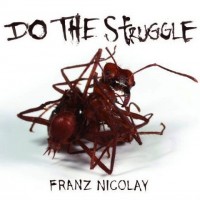 Franz Nicolay is possibly too talented for his own good. A multi-instrumentalist, when he finally took center stage after spending time in the likes of the World/Inferno Friendship Society, the Hold Steady, Against Me!, Guignol and Anti-Social Music, his first album came out a bit uneven. All the songs on his first two solo albums, Major General and Luck and Courage, are good songs, but they tend to bounce between dramatic, depressing songs to poppy songs that show Nicolay's ability to turn a phrase without much regard for the flow of the album. It seems that Nicolay has found his groove on his third full-length and has landed on the end of the spectrum opposite songs like General's piano-driven "Note on a Subway Wall" and the banjo-heavy "Cease-fire, or, Mrs. Norman Maine" for something a bit more catchy.

The biggest difference here than on previous releases is that the album was produced by Oktopus of the experimental hip hop duo dÃ¤lek. Oktopus' production plays a major part in this release as, unlike on Nicolay's previous releases, this one has an ambient sound to the entire thing. In fact, there are short interludes between each song that only fit because of the at-first-jarring production. The production, though noticeable on all the songs, is probably most prevalent on "Do the Struggle" and "Joy" and works better on the louder parts of the album.

Diving into the actual songs themselves, Nicolay isn't throwing any curve balls. He's a great storyteller and wordsmith. He paints pictures of scenes in between coming up with slogan-esque lyrics like "Never trust a man without a horror story" and the slightly lengthier "Joy / Like love and sleep / Evades its pursuer / But it let's itself be found." But just as he is fully capable of planting a simple line that is bound to get stuck in the listener's head, he is also able to express emotions in such a unique way such as when he sings "They said âIs this a joke for you / Or a serious battle?' / We said âWhen the monkey throws himself against the door / He doesn't care if it opens / Long as it rattles / Scares the children / Makes the parents gasp / We come not to demand / But to baffle'" on his tale of a group of "conceptual terrorists," the titular "Do the Struggle."

Whereas "Joy" is probably the slowest song, bordering on sounding mournful with an almost drudging sound, the other songs are delivered more speedily with the exception of "Take No Prisoners," on which Nicolay takes a backseat to Emilyn Brodsky's singing. On the duet, Brodsky pleads "Please take no prisoners / Take heart / Or take me home." As enjoyable as those tracks are, my preference is for songs with a steady beat and a faster, more fun pace like "Frankie Stubbs' Tears," which opens with Nicolay effortlessly belting out "Trees are cannibals / They eat their own" to open the track before, later on, singing some "woah"s to end it and the slightly-more-laidback-but-bouncier "The Day All the Leaves Came Down" with its intermittent bouts of heavy drumming on which Nicolay asks "Which is the right life / The quiet life or the night life? / Which is the brightest / The morning or the nightlight? / Which held you the tightest / Your first love or your third wife?"

While this album is Nicolay's most consistent solo release, there is no denying the production takes some getting used to. I am still unsure if it is beneficial or detrimental to the record. I certainly enjoyed the songs that I heard as demos and am sure I would enjoy these songs in their much more stripped down, live format. As a result, the strange production on the album seems, at the least, unnecessary and an odd choice for an album with folk songs on it. A song like "Joy" sounds more full, but "Did Your Broken Heart Make You Who You Are?" might work better with an effort to bring out its pop quality. However, taking the album for what it is, it is a very solid album without a weak song and one I continue to find myself coming back to for more listens.