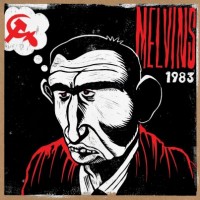 First, (another) Melvins primer: Traditionally, the Melvins have been a three-piece with Buzz Osborne on guitar, Dale Crover on drums and a seemingly revolving cast on bass. However, in 2006, the band recruited into its ranks bassist Jared Warren and drummer Coady Willis, both of Big Business (yes, that's TWO drummers.) However, in 2011, while Big Business was on tour, Osborne and Crover toured with frequent Melvins collaborator Trevor Dunn on acoustic bass as "Melvins Lite." During this time, and afterwards, Melvins Lite recorded a reported 50-55 tracks with Dunn. However, also around that time, the Melvins met up with their original drummer, Mike Dillard, and did some recordings as Melvins 1983, with Dillard on drums, Osborne on guitar and Crover on bass. 1983 is the result of the Osborne/Crover/Dillard version of the band.

With both original-original Melvins Osborne and Dillard (and almost-original Melvin Crover substituting for original Melvin Matt Lukin on bass), the temptation would be to re-record old songs or play songs in their old style. But, being the Melvins, instead of going the obvious route, on this four-song EP, they play a melange of their earliest, and most current styles across three new songs and a cover of the Lewd.

When the Melvins first started out, they played a heavier, thicker, more rumbling hardcore. Here, that style does make an appearance, most namely on "Stick 'Em Up, Bitch" which ends in two minutes of full on charging MÃ¶tÃ¶rhead-style thrash. But, even more surprising is "Psycho-delic Haze" and "Stump Farmer," which are rooted in the heavy, lumbering, but energetic stomp of the current four-piece Melvins. The biggest surprise is the difference between Dillard's drummer and Crover's. Crover seems to be very much a loose, soulful drummer, smashing forward in the blues-influenced thwomp of John Bonham and other behemoths. By contrast, Dillard is much more of a punk drummer. In lieu of Crover's swinging, Dillard relentless marches forward with a somewhat distanced sound, in a style not dissimilar to Black Flag's Robo. The result is amplified in Osborne's guitar and Crover's bass. Where Melvins' strings usually ride the wave of a thwomping drum, slamming together on the beat and breaking apart in between, here, because Dillard is such a consistent anchor, Osborne and Crover drift away from the beat and become more free flowing with their licks, knowing that they'll be able to return to the beat with ease, due to its consistency. The result is a more airy, ghostly Melvins that don't some much trudge as drift.

So far, this year, the Melvins have released one LP, two EPs and seven singles, all of which have been unique unto themselves and equally interesting. What else can I say but "Keep 'em coming, boys?"