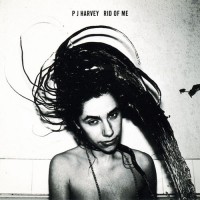 Rid of Me is one of two awesome albums from 1993 helmed by Steve Albini, a big name producer with an indie sensibility (the other of course being Nirvana's In Utero). Here's my thing about hi-fi recording techniques: Clarity in recording is constantly being redefined, just like CGI in a movie. It's always better in the here and now, but in a few years it'll be dated. I'm always amazed by how lifeless a lot of late '90s rock bands sound now, having gone through a musical baptism in high school. Plenty has been written about how bad a lot of '80s big money productions sound; the vocals are always pushed too high in the mix, the music is always buried and mutilated and oversimplified, and the result is something that sounds nothing like a live band (and I prize live performance). But not enough people talk about the loudness wars, about the way some '90s records have no dynamics whatsoever.

Lo-fi, however, will always sound the same. Tape hiss is tape hiss is tape hiss. The vocals might be indecipherable, but the result is much more raw and invigorating (r.e. â every pre-4 A.D. Mountain Goats album ever). With Albini, you get the best of both worlds, though. His production on PJ Harvey's Rid of Me is rougher than most albums, something perfectly suited for Polly Jean's harpy howl and heavy blues riffs. The album was mostly recorded live, and it sounds it. But Albini is still a professional to a certain extent; he captures amazing performances from Harvey's band. And while the vocals are lower in the mix, you can still clearly make out everything Polly says.

I've obviously gone on a bit of tangent away from the actual performer. Now, getting back to Polly Jean (finally). Rid of Me is the more assured follow-up to Dry. It's a more even listening experience, and few people have been able to replicate PJ's take on heavy blues music (Looking at you, the Kills) and guitar dirges (although Screaming Females come close). Part Black Sabbath, part Patti Smith, all awesome, Polly Jean took a lot of rock's clichÃ©s (desire for power, sex and sexy power), and grabbed hold of them. The title track establishes her command of her body with lines like "Lick my legs / I'm on fire / Lick my legs / of desire." And do I even have to describe "Rub âTil It Bleeds?" Throw in a jaw-dropping Bob Dylan cover ("Highway '61 Revisited") and you've got one of the best albums of the '90s.

You want to know how inspirational Rid of Me gets? It's simultaneously a reference point for sensitive work like Craig Thompson's Blankets and lesbian revenge fantasies like Rid of Me: A Story by Kate Schatz. Look at the album cover, with Harvey throwing her wet hair around like she's Medusa. Here, as in her songs, she is sexually frightening and frighteningly sexual. Her guitar and backing band obliterate everything. Yet Harvey never really revisited this bleak songwriting style (not counting weak retread Uh-Huh Her), but she didn't need to do so. Rid of Me is a relentlessly raw, rocking dirge without peer.

The Sensitives: Poetry As Hollow As It Can Be