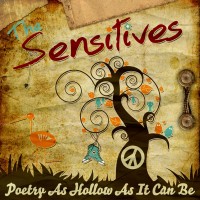 The Sensitives are a young Swedish three-piece favoring a kind of rabble-rousing approach to pop-punk, with songs blessed with harmonies and melody from the get go. There is also quite a '50s sound to the music and that explains the sense of rock 'n' roll that pervades this album, creating quite an uplifting piece of work.

The vocals on this record are delivered by the sweet-sounding Paulina Hjertton along with Martin BÃ¤ck, who adds the perfect foil to that cleaner sound of Hjertton with a gruff performance providing the songs a hint of grit.

The opening trio of songs, "Kill You Another Day," "My Baby" and "Don't Don't Don't" provide a foot-stomping beginning that suggests that this would be a band that shows an audience a grand time when on stage. The more I listen to this album the more of a rock 'n' roll feel comes across and creates something with a welcomed vibrancy. That ebullience follows on throughout the album, with up-tempo punk rock 'n' roll forming a strong backbone to what the Sensitives are doing. In "I'm Sorry That I Fucked It Up," the group show that it's not all about high energy although it's far from a slow song, but a much more acoustic sound relaxes the mood a bit. However, the foot is pressed down on the gas once more in "Honest Try" and the pace continues until the end of the album.

Repeated plays and a break from the record have helped me more appreciate the band and what they're doing and it's also finally hit me who the Sensitives remind me of at times: the now defunct Even In Blackouts. Both bands have a sort of ragged folk/rock 'n' roll sound and both have great female vocalists to boot. On this record my favorite tracks are those where Hjertton's voice takes center stage and it's "Suits Are Dangerous Animals" where I think her voice excels, as well as sounding very much like Liz Eldredge of the aforementioned Even In Blackouts.

This is a band worth checking out both on record and l'd guess that live they'd be a blast too. From looking at the relevant social media pages it seems that the Sensitives are touring a lot in mainland Europe during this year and I urge anyone who gets the chance to see them to do so and to take their dancing shoes along.

PJ Harvey: Rid of Me