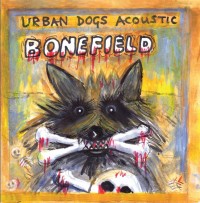 Charlie Harper's name is synonymous with punk rock, mostly for his involvement in the long running UK Subs, a band revered by many across the world and which is still putting out new and vital music today. I must admit I have a soft spot for both Harper and the UK Subs as the first gig I ever went to as a spotty teen was to see the first tour of the Harper/Garrett/Gibbs/Roberts line up, which for me will always be the definitive foursome holding down the positions in the band. In tandem with the Subs, Harper also had the Urban Dogs running as more ad hoc and part-time venture and this latest release under that moniker is basically himself and Knox (The Vibrators) performing some old songs and some covers, as well as the odd new track.

I'd be the first to hold up my hand and say that the whole acoustic punk thing is a minefieldâsome of it works but some of it fails miserably and I'm a tad wary of these kinds of releases. Therefore, first track up on Bonefield is a huge test for the duo, as "Warhead" is one of the most memorable and well-loved UK Subs tracks, with a bass line that is firmly etched into many aging punks' heads. What Harper and Knox manage to do to this iconic song is make it into something totally new. There is no repetition of the bass line, just two acoustic guitars bringing new life into the track and showing that some songs can be stripped down and rebuilt into something that has a contemporary feel. A good start indeed.

That opening track sets one of the high points of the album, although it must be said that most of the songs are well done and generally the older Subs/Vibrators standards are able to stand on their own merits under their new updated guise.

What follows then are some decent tunes with the outstanding one being a favorite UK Subs song of mine, "Tomorrow's Girls," and for which Harper's liner notes identify that this was an acoustic song before it was first released. With the first Urban Dogs single, "New Barbarians," also being featured, it's clear that some thought and effort has been put into choosing the right songs to include on this album. Add to that a very good version of the Vibrators' "Dragnet" and both Harper and Knox can take some pride in what they have achieved, both back in the day as well as here in 2012.

Other notable songs on the album include a simple yet surprisingly strong cover of "Summertime" and "Move It On Over" by Hank Williams. Beyond those there are two other covers, both of which have a timeworn feel to them, and let's face it neither Harper or Knox are spring chickens; "Hobo's Lullaby," a song performed by both Woodie and Arlo Guthrie and also "Cocaine," a song written by a blind busking blues singer, the Reverend Gary Davies.

The one track I could do without is the Knox-penned-and-sung "Swamp Dog Blues," which basically charts his, and to a lesser extent, Harper's timeline in terms of birth to current times in respect of their musical development. The one redeeming feature for this track is that is clearly shows why some of the cover versions were chosenâthese are guys of advanced years, even to this seasoned 46-year-oldâand they've obviously heard and been influenced by a wide range of music: they've been there, seen/heard it and worn the t-shirt.

Finally it's worth noting that at times Harper's voice has an almost Dylan-esque quality to it although the one constant vocal feature is a voice that is laced with both age and warmth, delivering the lyrics with heart and belief.

Overall this is a good album, perhaps not essential but if you're a fan of Charlie Harper then it's certainly worth picking up to see what he's doing aside from the UK Subs these days. (I'd give this 6.5 if I could but that's not possible here so rounded down to a 6).