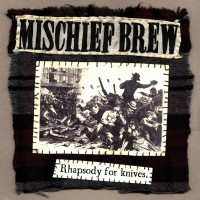 In 2011, Mischief Brew released their best album to date, the aggressive and archaic The Stone Operation. While the band has never been known for being prolific, they had some extra songs written for those sessions that they never recorded. It was a wise choice as those songs, now finally collected on Rhapsody for Knives, merge together as their own fully formed piece and also create a slightly different atmosphere than the preceding LP.

"Bang Up Policework" showcases the band's unique ability to highlight contemporary issues through the tools of pre-war folksmen. The band paints a picture where through social media, modern phones and instant communication, the population has forged their own 1984 and everyone is a private detective spying on everyone elseâall without using any of those words. Instead, lead singer Erik Petersen screams "You've let the rats out of your corn and let the vampires in your house!" and despite the 1800s imagery, seems to be talking about what is happening right now.

"On Freedom" harkens back to Mischief Brew's earliest days. Originally, Mischief Brew was intended to be a medieval ballad unit, but quickly adopted harder punk riffage, as seen in the powerful strokes of "Policework." But, "On Freedom" finds Petersen strumming along to something that could have been written in the days of kings. While "Policework" is timely despite its trappings, "On Freedom" is reflective without being escapist.

But then, the band cuts what might be their most epic tune to date. (And I don't mean "That's epic man!" but rather, "Hark, young Vynersern, thou shalt sail von southyon, for ye epic adventuree"). "Catch Fire" begins with a low single acoustic strum and builds in a slow, cold burn until at the end the band erupts in a smash while Petersen screams "Maybe I'll catch fire!" But, through the increasing, steady build, Petersen paints a more and more vivid depiction of pressure from an increasingly overbearing state until at the end, with no way out, he threatens self immolation and sounds like he means it. I hesitate to call Petersen and the Mischief Brew band geniusesâ¦butâ¦Petersen and the Mischief brew band are geniuses.