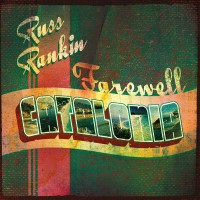 Russ Rankin is undoubtedly one of the most influential front men from the last 20 years of punk music. Rankin made a name for himself by being perhaps the most straight arrow frontman, extolling the values of being straight edge, vegan and even avoiding promiscuity. What always made Rankin unique is his ability to take these traditionally nerdy or unmasculine topics and not only make them interesting but make them dangerous. Even Good Riddance's most omnivorous fans couldn't deny Rankin's fierce presence when he snarled, "Blood splattered carcass / It whets your appetite," on "Waste." However, Rankin has always had the benefit of playing in a punk band where angry, loud and aggressive is the norm. With 2012's Farewell Catalonia, Rankin attempts to bring his trademark rasp and songwriting to a more nuanced and subtle side of music, ditching throat tearing shouts for melodies and a barrage of hardcore for a far more traditional rock sound.

The content of Farewell Catalonia is pretty much what fans of Rankin's work with Good Riddance would come to expect. It's a hearty blend of politics and self-deprecating love stories. Rankin's lyrics seem to reflect that he's as stable in his political beliefs as he is unstable in his personal life. While the opener, "Pushing Daisies," critiques those who give up and attempt to normalize, the follow up, "Departures," is a track of lost love that opens, "It's been about a year since my latest failure." While they do seem to exist at the opposite end of the spectrum, Rankin handles all aspects of his songs with a genuine honesty, noting his own shortcomings and constant struggle to maintain inspired and active and aware.

The main issues inFarewell Catalonia is the unbalanced feeling of it all. The track "Cold Blues" starts out with a slow, rambling story of a conflict between a father and daughter, that never seems to take form; it just describes some sort of vague conflict. Over halfway through the song, Rankin finally finds the right words and the last minute or so of the song actually becomes incredibly heartwarming but the track doesn't garner frequent plays because the first 2/3 of it are pretty aimless. Similarly, the track "Flesh and Bone" takes the topic of war and police actions and puts it to such a strange sing song melody that it's fairly cringe worthy.

The flaws of the album are made all the more tragic because when everything comes together well, Farewell Catalonia is amazing. The closing track, "Under the Hours," climaxes with a chorus of guitars, drums and an accordion as Rankin sings, "So don't wait / Just beyond destiny is fate / You so deserve better than this / So far away from the pain and lies / So don't cry / Throw open your window and fly / Leave all this wreckage behind / Higher than clouds where the tears won't stay." It's the kind of moment that could seem unquestionably cheesy if it's not done well, but (in this case) it's such a well balanced moment one leans more to touching than corny. So, while Farewell Catalonia isn't the perfect vehicle for Rankin's solo effort, it's a very strong piece with enough moments to warrant some repeat listening and really when an artist takes such a drastic departure from his or her comfort zone, that's a pretty good result.

The Atlas Moth / Altar of Plagues: Live in Philadelphia