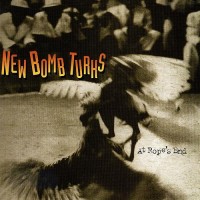 I first discovered the New Bomb Turks a long time back, on a Punk-O-Rama compilation my brother found a few years ago. The song was "Snap Decision," from this album, and it was simply wild. Finally, I've got the album. They have some very loyal fans, and though I can't yet identify as one of them (this is the first Turks record I've purchased), I must say, I'm mightily impressed by this release.

On a level, the band are like many other garage punk bandsâthey're kind of like a louder, faster, better, fuzzed up and far more raucous version of one of those slightly cringey bar bands that do some Chuck Berry and Jerry Lee Lewis numbers. But then, there's something more at work on this record that sets them apart from the crowd.

For a start, though the band don't make out to be amazing musicians, I couldn't describe any of the playing on this record as sloppy. In fact, there's genuinely brilliant guitar work from the word go in album opener "Scapegoat Soup." Jim Weber smashes out wild blues-on-ketamine and '80s hardcore riffs, whips round the fretboard and tears into a face-melting fuzz pedal-powered solo, all with an insanely tight, powerful rhythm section backing him up, and snotty vocals draped over it all. It's also enhanced by an excellent production job that's raw and clear at the same time. Not only does this opener grab your attention, but it distances them quite considerably from rather simpler garage bands.

Furthermore, riffs aren't always just danceable, sometimes they really attack. The lyrics are darker and more complex too, eschewing a lot of garage clichÃ©s, and the band also aren't afraid to do things that other garage punk bands might avoid. My favorite song from the album, "Defiled," makes for a good example. Those slamming riffs are there, reinforced with primal, pounding drums and rock solid bass playing. Above, frontman Eric Davidson screams and sneers lyrics both harsh and introspective, with his always unhinged, frighteningly intense delivery giving lines like "Everyone they said were sinners gave me strength to play this game" a spine-chilling quality. As for breaking from the norm, the track uses a horn section which delves into freeform jazz during the bridge, whilst the song builds to its conclusion. After one of those build-ups that becomes more intense the more you've heard it, the chorus is reintroduced by Davidson with a genuinely blood-curdling scream, his specialty. It's like the "New Noise" of garage punk. Excellent.

Anyway, all these elements make for a fine record, with track after track of hard-rocking brilliance, only broken up by "Bolan's Crash," a good country number, and "Aspirin Aspirations," which is rather weirder, damaged blues (my least favorite, though the lyrics are good). Even without these to break up the thrashing, each track is unique and brilliant in its own way. I could go on, but hey. This is thrilling, feral rock and roll. Sound good? Go get it!

Yet to Define: Think Twice