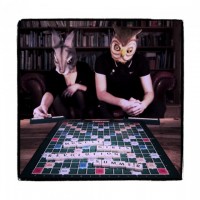 My first encounter with Muncie Girls came earlier this year and since then, well I've been rather smitten with the band. In fact, they're the band I've seen the most this year which is an honor (albeit a dubious one) that usually goes to Crazy Arm, and they've not failed once to get my head nodding and feet tapping.

Anyways, here are five new tracks that basically prove that Muncie Girls are currently on top of the pile in the U.K. in terms of writing and performing the perfect catchy pop-punk song. Once again Lande Hekt's vocal and bass performance is flawless as her warm tones deliver some great lyrics whilst her fingers work wonders with the four strings at her disposal. Alongside her, Dean McMullen provides intricacy and thunderous chords aplenty with his six allotted strings, and adds a handful of riffs that will become permanent inhabitants of your head. Behind this duo is Luke Ellis, who provides a snappy and complete performance on drums.

Opening with "Feel It Soon," which features one of McMullen's tasty riffs, I start to believe I've stumbled upon the best song of the year and it quickly becomes one of those tracks that eases its way into your life, never to leave. That's it then; a great song and now I'm ready for four good songs that come close but don't reach the same heights. Next is "Kasper and Randow" and what becomes blatantly apparent is that Muncie Girls are not content with opening with the best song in their arsenal; they also want a second great song on the record. This one provides more sing-along choruses that seem effortless as they grab hold of your tonsils to join in singing along with. Okay, I can deal with thatâtwo great songs in a row, bands do that sort of thing now and again. Bring on track three, "Bum Chicago."

Hmmm, it would seem that the gifted Muncies are intent on starting off with quality but not only do they keep raising the bar for subsequent efforts, they keep exceeding it too. "Bum Chicago" has a bit more pace to it and here Hekt's basslines drive the track along exquisitely. However, without the input of McMullen and Ellis, this could not be the song it isâin fact across the five songs all three members of the band play such an important part that it's easy to spot the synergy that is created by the Exeter-based trio in what they do.

Up fourth is the title track and if you think the excellence would finally take a break, or drop, then you're wrong. Maybe it's not the incremental step up that has been evident up to now but it's still a hugely impressive song nonetheless and once again Hekt, McMullen and Ellis come up with the goods.

"Railroad" is the song that brings the EP to a close and here I am left stunned at what I hear. This is probably the song of the year for me: opening with Lande's voice and bass, before the band kicks in for what is the song that is spinning in my head from the opening of my eyes on a daily basis since I first heard it. I kid you not, this song is from the top drawerâbetter than anything else on this record (and that's not easy to achieve) and better than "Phantom Limb" off the band's first EP, which is another marvelous Muncie's track.

It would be easy to give this 4.5 stars and say that it's not quite there as a classic but that would be denying Revolution Summer the plaudits it fully deserves and also not acknowledging what I truly think of it: this is one of the best EPs I've heard in more years than I can remember and it should be acknowledged now for the timelessness it exhibits. All five songs are of the highest quality, delivering on every level and it seems to be done with an ease that permeates the band when seen live, something that makes me appreciate them even more. If you only buy one record this year then this is the one it should be.