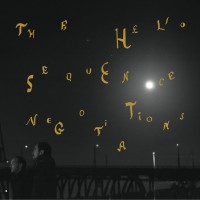 The Helio Sequence's luck–or lack thereof, really–is sort of unreal, but each time it's seemed to lead to better things. It wasn't enough that Brandon Summers, the heart and center of the Pacific Northwest recording project in question, lost his voice after touring for half of 2004. He essentially had to relearn to sing, turning in a captivating, Dylan-esque performance on what would become the band's next LP, 2008's Keep Your Eyes Ahead. But when the band headed back on the road to support the record the next year, their studio/practice space was flooded by plumbing unable to withstand some heavy rains. They sought out a new space, which in turn afforded them greater room, and the freshly ambitious two-piece filled it with new gear and equipment they hadn't used on records before. Negotiations, the band's first batch of new material since that 2008 LP, is all the better for it.

There are two crucial components to the Helio Sequence's progressive arc, and on Negotiations, one seems to be amplified and the other gently relaxed. If the "dream pop" term ever fit them well, that time's now: Negotiations is lush and immersive, and while one could have applied those descriptors to the band's past efforts, they're especially on-point now, erecting soft beds of sound Summers uses to float his subtly yearning vocals on (further placing the band in some weird, black hole middle ground between "alternative" and "indie" rock). But those vocals in question now seem to crib far fewer notes from Bob Dylan; while Summers' previous twang worked fine in the context of his very different musical style, things seem to mesh even more smoothly now, with a certain deliberation in his voice more evident than usual. The only really obvious homages, at least comparatively, is the reverb-touched, folky centerpiece "Harvester of Souls," where Summers strips down as much as he's seemingly willing (and yet, it's still an incredibly delicate, intricate atmosphere Justin Vernon would probably nod approvingly to). And penultimate number "December," for sure, but these tracks are clearly Summers' own.

Whatever unfortunate circumstances the Helio Sequence have suffered, they don't show it. Easygoing opener "One More Time" bristles with inviting, chiming melodies, seemingly devised with the strict intention of listening to them in a car, at dusk, on a stretch of desert road (sentimentally singing along to the huge hooks too, imaginably). There's a little bit of resignation in Summers' voice on "Silence on Silence," and yet there's an underlying vibe of playfulness, too. "Downward Spiral" and the arresting "Open Letter" uses wavering keys much in the same Thrice integrated it on their Water EP, while the accessible frames of "The Measure" and "When The Shadow Falls" hint at the crossover potential THS have somehow yet to realize during their decade-plus tenure.

Through thick and thin, the Helio Sequence are building themselves a pretty substantial catalog. I'm not saying I hope the band encounter more obstacles before they make plans for their next record, but the act of pushing through such difficult circumstances has already proven to be a hell of a catalyst.

Against Me! / Andrew Jackson Jihad / Joyce Manor: Live in Seattle