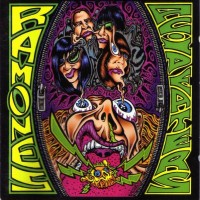 The Ramones are one of my favorite bands. But this album of '60s psychedelic cover songs was the worst thing in their 22-year career. They have done great cover songs before Acid Eaters like "Let's Dance," "California Sun" "Do You Wanna Dance?" and "Palisades Park," which were 60s bubblegum pop songs, not hippy tunes. These songs sounded great when played in the Ramones' punk fashion. Not so for the trippy stoner material.

One problem with Acid Eaters is the production, the guitar was too low and in the background on most songs. "Have You Ever Seen the Rain?" is an exception. The notable power chord sounds we have expected from the Ramones are finally emerging. Sadly, Joey is not at his best. Actually, on all the songs he sounds tired and lackluster and the whole band seems pretty bored and uncreative. They sound like a crappy cover band trying to make a few bucks. The high point in Joey's vocals is the cover of "Substitute" by the Who, an OK cover, but not great. The closest thing to bubblegum here is "Surf City;" by the time I got that far I had grown tired of listening (I was bored through the whole thing).

My favorite track on this was "I Can't Control Myself," as the whole production was wonderfully amazing. Even with that they still sound like a good opening band, definitely not the powerful being that was the Ramones.

The compilation Hey! Ho! Let's Go: The Anthology is a very good look at most of the Ramones' material. Unsurprisingly, there is not one song from Acid Eaters on that, which should hopefully tell you something. Buy any other Ramones album other than this one. And if you're a completist who has to buy all the Ramones releases, get The Chrysalis Years. You get three CDs, including Acid Eaters and Mondo Bizarro, which has their cover of the Spider-man theme song. Ironically, that cover song is way better than anything off of this disastrous release.