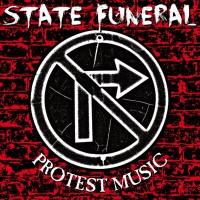 Okay, State Funeral's debut release is actually only available when you purchase the latest edition of the Artcore fanzine (#30), yet another glorious read compiled by Welly, the former frontman of Four Letter Word. When that band decided to call it a day, I wondered whether Welly would return to music or if he would concentrate on the âzine and graphics. Fortunately for those who enjoyed Four Letter Word, with its revolving door of members, it hasn't taken Welly too long to return like a phoenix from the ashes after the demise of his previous group.

What is pleasing about this record is that, as its title suggests, this is an in your face attack on a number of deserving targets, something that I think punk rock is lacking these days. There is no doubting that the recording is well suited to the music and the message in that it's not covered over in glossâthis harkens back to the days when production values were not the main thrust when putting out a release. That's not to say that this is some lo-fi pile of jumble, far from it; it just manages to maintain enough grit to match the determination to spit out anger ridden lyrics in order to deliver a variety of protestations.

Across the six tracks here those targets include the obvious like the government of the day and the various crap heaped upon the country (U.K.) by those in power, to the slightly less obvious but equally deserving of being highlighted; the bands that play to achieve nothing more than fame, fortune and to see their names in bright lights (or perhaps in Kerrang!) on "Between Punk Rock and a Hardcore Place." However, the one track that really does reverberate in me is "Watching The Surburbanoids," in which the target is those who take a back seat and let governments and corporations alike walk all over them without blinking an eye at what is going on, just showing an alarming level of indifference in their sheep-like behavior of acceptance. The one thing I hope I never become is one of those peopleâit's almost a deep rooted fear of becoming complacent and consenting, whether it's in public or in work or wherever, and this song serves as a not so gentle reminder of who I hope I am.

The packaging of this single is yet another fine work of art from Welly and has the feel of something that could have been found back in the '80s, a time when there seemed to be much more anger in punk rock. The depiction of Prime Minister David Cameron, on the final page of the eight-page booklet, wielding a scythe is a damning indictment of what the coalition government has done since coming to power in terms of implementing a systematic swathe of cuts to services within the U.K.

For anyone aware of Four Letter Word then I'd say that State Funeral has taken a less melodic approach to punk rock and has more of a hardcore edge. This new venture certainly features a more enraged form of communication which is timely and also a welcomed new direction.

If you want this EP then, as it's been noted, you have to get the fanzine which in itself is a great piece of work. You also get a download card for this single as well as the whole Terminal Decay album that came with the previous issue of Artcore and which features 20 tracks from bands all over the globe. Seeking this out should be a no brainer.