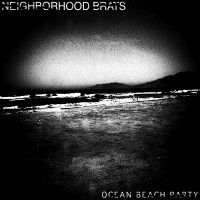 Neighborhood Brats is a four-piece from San Francisco peddling a fine line in punk rock 'n' roll. Headed up by the dynamic (and in live photos occasionally demonic looking) Jenny Angelillo on vocals, the band attacks the two songs on this beach-themed single as if they have somewhere else to be and have no time for hanging around.

The A side, "Ocean Beach Party," is the more frenetic of the two tunes and once again goes to highlight the comparisons that have frequently been made to bands lumped under the Dangerhouse Records banner. It's actually no bad thing and it does provide a more than adequate impression of what the Neighborhood Brats are about, which is fast paced and snotty punk rock delivered in a manner that aims to clear a path through all in its way with a low regard for self-preservation.

The flipside, "Shark Beach," slows things down a notch and actually has less of the whole Dangerhouse thing going on and in keeping with its title/content, contains a brooding and slightly malevolent quality to it. It's good to have something that isn't a total facsimile of the main track to offer up and in doing so shows that even in a genre that can be limiting it's possible to add some diversity to what you produce.

Hell, this is a short review for a record that is brief itselfâ"Shark Beach", at just under two-and-a-half minutes, is a musical epic in comparison to "Ocean Beach Party." It's good stuff and a nice follow on from 2011's debut self-titled EP and the We Own The Night 7" released earlier this year. However, I still want a full album from this band regardless of how short it might end up being.