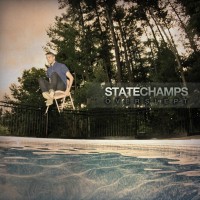 State Champs showed they could grind out that pop-punk sound in fine form from their EP Apparently, I'm Nothing. It wasn't that extraordinary but you could sense potential. Overslept allows them less time to cut their teeth and from just four tracks (well three...not counting the intro), it proved quite a test to make an impact. Challenge accepted by the gents! The Albany natives give it a pretty impressive shot, and that isn't easy to do in such a small space of time with these poppy anthems.

Derek DiScanio's vocals are clean and impressive with hints of Patrick Stump, Ryan Key and even small dashes of Jonny Craig. He stands out on his own but you can tell maybe you heard a similar voice somewhere before. That's where the guitars help differentiate this band. "Critical" is that instinctive pop-punk ballad but it's impressive how State Champs add a gritty edge to the punk sound. It's still poppy but with a heavy undertone. They tread familiar ground and aren't original in the least but there's a crisp balance felt in the few tracks, which just gives it an extra edge in this genre.

"We Are The Brave" is saturated with that perfect symmetry from the last EP consisting of well-suited buildups and DiScanio's sense of purpose on the mic. Cheers to the planning and execution here with the upbeat breakdowns as the band avoids falling into that contrived category which a lot of contemporary pop-punk bands get trapped in. "Remedy" is another example of this and it's pretty clear at the end that this band does pop-punk a step ahead of the curve. The only drawback is the songs leave you clamoring for more, but then again, that's a good sign of things to come for a future LP.