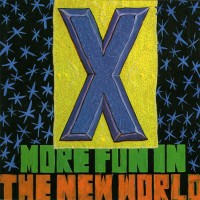 In many ways, More Fun in the New World marks the end of X's classic run of albums. It's the last truly great X album. The last one produced by the Doors' Ray Manzarek. And, as the band's first true stab at commercial viability, the last record to sound uncompromised. Indeed, More Fun exists as a sort of bridge. It's not quite as dark as the group's first three records, nor is it as unabashedly cleaned up as what came later. X tried on a few different pop moves in the '80s, and depending on your perspective, More Fun is either the weakest of the band's classic records or the best of their commercial period.

The title is actually a composite of the first two tracks, "The New World" and "We're Having Much More Fun." This opening one-two punch announces the record's m.o. Where X used to dark lyrically and threatening musically, More Fun opts for a more ironic approach. Arguably bearing more of a resemblance to Stiff Records' angry young songwriters than L.A. punk, the album weds sarcastic, even bitter words to catchy rockabilly instrumentals. Look no further than "I Must Not Think Bad Thoughts" for proof of this change.

But for all the snark, X still throws in some legitimate pop moves. There's the "Breathless" cover. The Talking Heads-ish "True Love Pt. #2" is one of a few tracks touched by new wave. Sure, "Devil Doll" brings back the punk, but overall, this is a cleaner, softer album.

More Fun in the New World attempted to bring X to a wider audience, but it failed to chart accordingly. Approaching desperation, the members sought out metal producer Michael Wagener for follow-up Ain't Love Grand!. Wagener did such a terrible job that he A) effectively broke X and caused guitarist Billy Zoom to quite the band and B) made it difficult for me to believe he mixed Metallica's Master of Puppets. Up to this point, X had burned with ideas, but once they hit a wall, none of the members quite recovered creatively. As such, More Fun has a certain note of finality. The members certainly continued to put out good records later on, both with and without X, but More Fun ends the original streak.

Dinosaur Jr.: I Bet On Sky