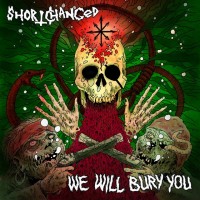 On Short Changed's 2010 self-titled, the band showcased their droll brand of balls-to-the-wall hardcore punk. In 2012, they're back, but this time it's ovaries-to-the-wall. Replacing their former lead singer is Bekka, whose throat-shredding shouts don't terribly deviate from the previous album's atonal yells aside from being either hampered by a retainer or a vocal approach based on the stylings of Neil Goldman.

The fast, thrashy hardcore is still very much intact, along with the snarky humor of songs like "Punx With an Ex," "How I Met Your Death," "Pray For S.I.D.S." and "Vanrkey" (though why it's not called "Vanarchy" I don't understand). The band also inexplicably titles two songs after hardcore bands ("Krang," "Refuse Resist") and one after something resembling their musical genre ("Fast-core"). The band seems to have no qualms calling out other bands, claiming they "Should have beaten up the Scarred while we were in New York" on "Vanrkey" and bemoaning those who slamdance for Warkrime and Ecoli but not to Short Changed on "Fast-Core."

Take it all with a grain of salt, and there are some pretty funny tracks on We Will Bury You. "Fuck You, Fight Me" is all about video games, testifying "Columns is good / Dr. Mario is better / Nintendo vs. Sega as if it matters / Wii's made for girls, it makes me sick / Plug in any system so I can get my fix." "Pray For S.I.D.S." delivers the succinct but brash message, "I wish all your kids had SIDS / babies pushing up daisies."

Without a lyrics sheet, Short Changed is like many other fast, raw hardcore punk bands. But the lighthearted approach gives them a certain appeal and a niche of their own.

No Mistake: Connect The Dots ... Complete the Puzzle

The Burning of Rome: With Us