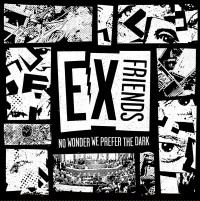 Oh, the songs are still infectious like the plague, but Tannenbaum has a far raspier delivery than Brain McGee. But coupled with Crash's high register, Ex Friends sound closer in spirit to the kind of bands Rumbletowne is championing on the other side of the country. RVIVR and Agatha certainly come to mind. Ex Friends have a loose, energetic delivery.

They also totally have an origin song. "Ex Friends" breaks down the many ways people grow to hate each other–with a big throaty chorus along the way. "So Many Kisses" goes a similar route. That leaves "The Legend of the Holy Drinker" and "Archaeologists of the Future," the opening and closing tracks, respectively, as the relatively heavier tunes. Not quite as poppy, but they possess some nice guitar textures, especially on "Archaeologists."

Bonus track "Waimanalo Confidential" is in keeping with the 7" proper, although the outro stretches on a little too long. Of the five songs, it's ever so slightly less essential, making it a prime outtake. But overall, No Wonder is a strong 7" from a bunch of Philly folk with history. With Plow United's members spread across the country, it's also hopefully a teaser for a full-length.

The Burning of Rome: With Us