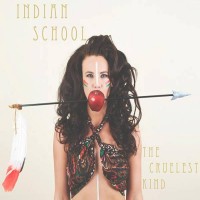 In 2004, the So Cal band formerly known as Audio Karate released Lady Melody, an excellent pop-punk record, before falling off the face of the earth. This very site gave it deserved high marks. Now, three-fourths of that band have reunited and rechristened themselves Indian School, and Animal Style Records have signed them up and reissued their debut EP, The Cruelest Kind.

Evolution. Maturity. Whatever you want to call it, the germ that forged Audio Karate's memorable and earworm-inducing hooks is still hard at work in this stark reinvention. It's reminiscent of the gulf separating the Promise Ring's Very Emergency and Wood/Water, with the addition of swarming acoustic guitars, tinkling ivories and perfectly lovely harmonies to their signature driving pop sound, though now without much of the punk.

"Rob Your House" is by far the stand out track of this record, and is also the closest to an Audio Karate single that fans of that band will find. It may also be where those fans stop, as the rest of the EP finds Indian School transforming into an amalgamation of MyArcadeFireShinsMorningJacket. If the rest of the album had the same driving pace and immediacy of this track's last 45 seconds, I'd have cushioned the blow on that last sentence.

Throughout, Arturo Barrio's vocals are swaddled in the velvety cushion of that very distinct clipped distortion you remember so well from the first two Strokes albums, which sounds swell if you don't mistake the opening verse of "Elvis" for an unreleased Is This It b-side. Which is really a shame, because the one thing Indian School do well, particularly in the two tracks mentioned above, is belt a rousing, sing along chorus. This band has not lost its ability to write a catchy hook, dig in and squeeze everything out of it, at times to make up for a lyrically weak verse: see the EP's closing midtempo, country lush "Head Right."

The highs are high and the lows are just fine on this EP. While it may not be the follow up record that fans of Lady Melody would have anticipated, the germs of hope still spring for a decent Indian School LP. And judging by the quality of their hooks, probably a pretty good live show to boot.

Sundials: When I Couldn't Breathe