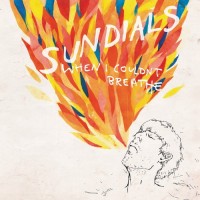 There is a reason why so called "college rock" bands, such as Pavement, Spoon and Superchunk, are often stereotyped as being bland and boring. That reason for this stereotype is that those bands are bland and boring. Much of college rock seems intended to explore texture and introspective feelings without getting anyone too excited about anything. Generally speaking, its played out. That's why it's so puzzling that Sundials, who are obviously influenced by the snoozers of yore, are not only a compelling listen, but also manage to retain the art of subtle context as harnessed by those of flannel and Converse.

When I Couldn't Breathe finds the band delving deeper into their warm, reflective tones as heard in the '90s. Gentle vocals are placed on top of thick, round guitar notes that don't so much strike as flow in and out in a wall of sound. Although such a gambit can find bands accidentally stumbling into say, Third Eye Blind territory, Sundials are savvy enough to keep just a slight edge on their music. "710" hides a rusty, screaming guitar in the back ground while a smashing bass supports an airy, Pulp-like guitar. Seventy-Five is propelled forward by an energetic, jangly beat that borrows from R.E.M. as well as classic pop-punk.

Frankly, I'm surprised it works so well, but it does. Perhaps, it's because the band specializes in conciseness. While the music might be designed for texture and not reckless energy, most songs are as compact as the average Ramones tune, with most coming in at well under the three, or even two, minute mark. Somehow, the band manages to evoke honest, melancholy feeling in such a short time. Part of this is because the band opts for simple, direct delivery over cleverness for the sake of cleverness. "Completely Broken" is based around the refrain "I'm gonna be completely broken." It's not necessarily the most ingenious or obtuse way to describe a break up, but, it's not route yet and paints an exact picture in a manner of sayâ¦ten seconds.

Morrissey was a master of this skill, using the normal to describe the exact, without ever mentioning the later directly. Sundials approach this feat with lines like "Sitting at the bar / Trying my best to stay sweet / It's so damn hard / And you come along / Run your fingers though my rat's nest / Asking how I am." The band doesn't exactly describe anything and in doing so, describes a scene with poignant detail.

Perhaps it's unfair to say an entire genre is bland or boring. Every rule has an exception. Every genre has at least a few exciting bands. I suppose that, perhaps, while most college rock can act as a substitute for Nightquil, Sundials know how to wake up and shake up all while using the same tools as those that put everyone else to bed.