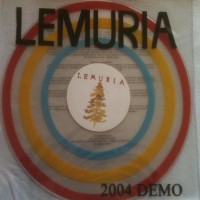 On the one hand, Lemuria's "secret surprise" 12", which was available exclusively through the band's online store bundled with plenty of other goodies, is really just a vinyl pressing of the band's 2004 demo, which has been available at shows and online as a CD-R for years. On the other hand, the bundle is really cool and the vinyl comes with pretty colors. Seriously, my copy is clear with red, yellow and blue rings. It looks super neat. Plus I got lots of knick-knacks and a shirt.

Besides, the demo was always a strong set of songs that deserved a wider audience. Curiously absent from the group's rarities compilation, The First Collection, this demo boasted five songs of suped up, Superchunky indie rock. While the band hasn't quite nailed down its sound, the interwoven co-ed vocals and peppy pace is on par with anything on Get Better. The only thing not quite developed (besides the audio quality) is the lyrics: Alex Kerns can get pretty darn sexually explicit. "Let's Think About What Just Happened" is a little dirty ("Pull my belt / Lift my shirt / Kiss my chest and shove me onto the mattress"), but compared to "Gravity" or "The Origamists," it's nearly quaint.

But the tracks still dissect relationships in a poetic, occasionally dark fashion, just as Lemuria would go on to do with their later material. Guitarist/vocalist Sheena Ozzella sounds way younger here, but she's still got the same lungs. As a placeholder while Lemuria works on their next album for Bridge Nine, this demo is still just as good as when I first heard it. Coupled with the excellent presentation and bonus items, it's a worthy purchase for many a fan.

Sundials: When I Couldn't Breathe