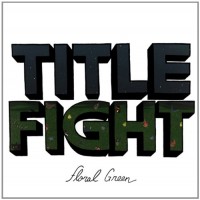 If Shed was Title Fight's coming of age record, the band's follow-up, Floral Green, encapsulates the next life stage; the period of time when we feel like we should have it all figured out, while in reality, most of us are still plagued by confusion and insecurity.

Title Fight continue to revel in the '90s on Floral Green, reviving the sounds of Knapsack and Jawbreaker, with elements of Nirvana and Sonic Youth present in parts. The band fuses these outside inspirations with their own style to once again produce an album that strays from their previous efforts. Title Fight experiment with more than just influences on the record, resulting in some of their most interesting and personal songwriting to date.

Bass player and dual vocalist Ned Russin sings of uncertainty on the record's opener, "Numb, But I Still Feel It." Russin pierces through the high-energy track's swirling guitars, screaming, "But did you know I hold my breath through every tunnel? / And wish I could get over this feeling of slipping under / But I never get that far." "Leaf" sonically and lyrically carries the same sensation, as Russin howls, "I feel lost, feel boring" over compatibly wailing guitar riffs.

Jamie Rhoden approaches the vocals of "Like a Ritual" with an understated power, complementing the song's relative simplicity. Nearing its end, the initial restraint of the track diminishes into a frenzy of instruments, led by Shane Moran's and Rhoden's chaotic guitars. "Secret Society" follows, and is one of Floral Green's numerous high points. Aggressive and uncomplicated, the song is something of a departure for Title Fight, largely adhering to a more traditional punk rock format.

The transition from "Secret Society"'s dynamic hostility into the floating melody of "Head in the Ceiling Fan" is jarring, marking a slight shift in Floral Green's overall sound. Reminiscent of Hum, the song builds gradually, as Rhoden vocally drifts through abstract lyrics like, "Head in the ceiling fan goes rolling and missing like bullets slamming into deer skin." The track glides effortlessly into "Make You Cry," showcasing Russin and Rhoden's joint vocal abilities. In the same vein, "Calloused" sees Russin's hoarse vocal performance echoed and contrasted by Rhoden's clean tone.

Likely the pinnacle of Floral Green, "Lefty" is interchangeably coarse and delicate, heavily driven by Ben Russin's drumming and a low-key vocal performance. Album closer "In-Between" recalls a hint of Nirvana, but feels somewhat incomplete with its drawn-out vocals ahead of an abrupt finish.

Floral Green's standout moments aren't as instantly recognizable as those of its predecessor, Shed, but they're there, and become more apparent with each listen. Title Fight's constant growth and reinvention has seen them become one of those unique bands that are hard to define, and musically and lyrically, they're right where they should be.