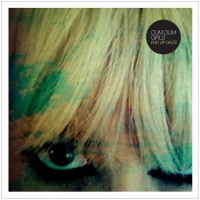 Dum Dum Girls continue to crank out tunes at a rapid clip. Last year brought the He Gets Me High EP and the Only in Dreams full-length; this year brings the End of Daze EP. If the 2011 material was a direct reaction to the death of frontwoman Dee Dee's mother, Daze finds her moving beyond the shock.

Part of that probably comes from the way the EP was recorded. The first three tracks (two originals, plus a cover of Strawberry Switchblade's "Trees and Flowers") get pretty dark. Perhaps the best representation comes from "Mine Tonight," and from one line in particular: "I've dreamed a death / It's mine tonight." That's deliciously goth.

The 2011 songs have a somber, shoegaze feel. For all the shimmering guitar lines, the songs don't do much in terms of dynamics. "Mine Tonight" and the cover both keep things sparsely arranged; it's clear why these tracks were cut from Only in Dreams. "I Got Nothing" at least has a somewhat peppy drum beat behind it, but this is still really atmospheric stuff.

Which leaves the two "new" songs to pick up the pace a bit. "Lord Knows" has a lumbering, booming beat, and while it's still mighty slow, there's still a whole lot more strength in the playing despite the resignation in the lyrics. "Season in Hell" actually sounds like a bona fide pop single, feeling as if Dee Dee has finally grown beyond her grief. She sings, "It's been a season in hell / Baby don't you know," but the tone has such confidence. The two sessions combine better than one would think, complementing the different energies and forming something that's both more atmospheric than Only in Dreams but still full of life.

Circle Jerks: My Career as a Jerk [DVD]