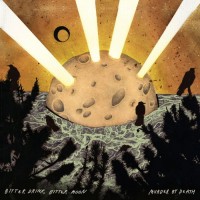 A fair amount of things have changed in the world of Murder By Death since the group released the fantastic Good Morning, Magpie back in 2010. In addition to leaving Vagrant Records, whom they had been working with since Red of Tooth and Claw, the group has upgraded to a five-piece, enlisting multi-instrumentalist Scott Brackett (of Okkervil River fame). Brackett's talents, combined with the considerable skills of longtime cellist Sarah Balliet have expanded what the band are capable of musically, while the rest of the group have sharpened their focus, resulting in Bitter Drink, Bitter Moon, a consistently great effort showcasing some of Murder By Death's best work yet.

Bitter Drink, Bitter Moon commences with "My Hill," an eerie, meditative piece that eschews the country influence the band have displayed in the past in favor of a sound not unlike that of fellow Midwesterners the National. It's a fine introduction and sets the tone for the rest of the album, but it's the next track "Lost River," complete with gorgeous piano melodies from Brackett, that really signals the arrival of the new Murder By Death. It's a more dynamic track than almost anything from the group's last two albums, and when the buildup to final crescendo pays off, it is nothing short of exhilarating.

The rest of the album is no less ambitious or interesting. Due to their colorful band name, Murder By Death have often been mistaken for a metal band. However, there are a few moments on Bitter Drink, Bitter Moon where that assumption wouldn't be completely inaccurate. Most notably, the feedback, pounding drums and distorted guitars of "Straight at the Sun" are more aggressive than the band's typical fare. Mid-album highlight "Hard World" has an almost pop-punk vibe musically speaking, while its eerily vivid lyrics portray the mysterious disappearance and death of a youth.

Vocalist/guitarist Adam Turla's voice has been compared countless times to that of Johnny Cash, and for good reason, but the adventurous nature of Bitter Drink, Bitter Moon gives him some room to try some new things, vocally.

It's worth mentioning that Bitter Drink, Bitter Moon was funded with the third largest campaign in the history of Kickstarter, and it shows in the packaging. Murder By Death have long been known for their attention to detail, and they do not disappoint here. The gorgeous album art needs to be pored over; the lyrics need to be read along with. Bitter Drink, Bitter Moon is the full package, best experienced in a physical format.

Murder By Death is firing on all cylinders on Bitter Drink, Bitter Moon, with every member at the top of their respective games. If you've ever been a fan, this is mandatory listening.

No Doubt: Push and Shove