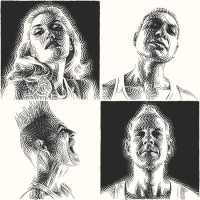 Push and Shove is symptomatic with modern pop music today. Despite the tremendous songwriting and performance talent of the band, the modern era, either in the guise of expensive producers, label execs or the butchered attention span of teenagers, has forced the band to cover their strongest assets with a mechanical, plastic, blippity bleeping bleach. Still, it does show how powerful No Doubt's music really is, that despite the acid wash of modern production, the band's songs still rise to the top.

The album opens with "Settle Down," a high energy, bombastic dance-pop number, and the album stays in this vein for the entire duration. Thunderous bass pops interminably throb in the background while blippity-bleeps are constantly slid just below layered vocals until the shiny chorus soars over top. While some songs warp into ballad-like numbers, the album never lets up with its computerized, ultra-slick facade, so that even when the album feels like its trying to saying something poignant, body shaking comes first and brain-usin' comes second.

Every No Doubt album has featured significant differences from its predecessor, and here, the change is most dramatic (though the leap isn't as far if one factors in Stefani's solo work). Staff Editor Bryne Yancey snarked on Twitter that "It was really nice of Gwen Stefani to let the No Doubt guys play on her new solo album" and he's right. This is not a No Dobut style rock album. It's a dance-pop album, just like Stefani's last two releases. "Looking Hot" is propelled by an '80s Madonna-ish synth cadence that has break-beats calculated to hit the dance floor at the most opportune time that could sit right next to "B-a-n-a-n-a-s."

In some ways, Push and Shove is the Rocksteady album pushed to the extreme. Where Rocksteady flirted with and referenced modern Jamaican dancehall, Push and Shove is a modern Jamaican Dancehall albumâ¦or at least it "sounds" like one. There is no nuance in this release. Random computerized sounds are constantly blasting from either speaker. The album booms and booms and booms some more. And, just when a concept is established, the songs get chopped and remixed to make sure that even those with the shortest attention span don't get bored.

It's sort of bizarre to see No Doubt take such an approach. In this age where pre-teeny boppers and teeny-boppers are chosen for cuteness first and talent second (or fourth or fifth) modern producers don't really need to worry about if songs are actually good. Through modern loops, smoothing and Auto-Tune, the most rote song can be mixed into infinite bombast so that even if its boring, it holds attention. It's a way to cover poor songwriting and fool the ears into thinking that volume and rapid change equals mental stimulation.

But, that's the thing. No Doubt doesn't need black studio magicks. I've heard No Doubt on record. I've seen them live. I've seen them live acoustic. All No Doubt needs to tear down the house is one voice and one guitar. (A drummer, bass player and small horn section helps, too). But, beyond that, anything else dilutes the band. Stefani does not need double or triple tracking. She does not need blippity bleeps to fill in behind her voice. We are here to listen to her and do not need, nor want, distractions (Unless the kids today actually do need distractions, their brains melted by excessive text messages and apps). Likewise, the band knows how to write strong hooks. They do not need computerized snippets to fill in between the riffs. The riffs are strong enough to stand on their own, and how.

One of No Doubt's most powerful skills is to mix the fun with deep, the heartwarming with the heart-wrenching. But, where "Magic's in the Makeup" and "Underneath It All" wrapped chains around the heart with tender words and tender strings, here, in lieu of a gentle touch, Push and Shove offers only WHOMPWHOMPWHOMPWHOMPWHOMP!

But, despite the fancy gloss on top of the record, the songs do show that they are damn good. Although the mixing constantly wants the synth-bass to outshine Gwen's powerful as ever voice, songs like "Push and Shove," "One More Summer" and even "Settle Down" are solid, solid tunes that, if recorded in the proper context, could rival their best work. Compare the acoustic versions of these songs found on some bonus editions of the album, and you'll find that they have the snappiness, the gut punch and heart snare of the best stuff on Return of Saturn. Even a cursory listen to "Sparkle" shows that the band is in top form here. The band still has the goods, they've just been painted with a much too thick sheen.

Then again, perhaps by insisting that No Doubt does what they do best, I am being tyrannical. That is to say, No Doubt is in a better position to define No Doubt than some guy that spent $15 at Target (Deluxe edition, yo). Ignoring the organic, soul-shaking tunes of the band's past, and looking at Push and Shove in isolation yields quite a different picture.

There is little nuance here. There is little soul searching here. But, the tunes do boom. They shake the room. They force you to get down, propelled by some primal cadence from before the time of language. Perhaps the album isn't designed to be "listened to" but to shake the body. If you were at a dance club, or even affi de dancehall, and "Push and Shove" sizzled on between Ce'Cille, it would give the Jamaicans a run for their money. These tunes do kick like a mule. And with the maxed out bass lines, they certainly sound more massive, more energetic and simply better on a big sound system. It seems like No Doubt isn't interested in repeating what they've already done, no matter how masterful they are at it, and that's a noble cause. Making an almost entirely dance record is either risky or timely, and frankly, it mostly works.

As a "No Doubt" album, Push and Shove has the songs strong enough to contend with any of their other hits, but the match is ultimately lost by robot-production. But, as a No Doubt album, the album succeeds. The logical conclusion from the organic-ska of No Doubt and nearing with Rocksteady, Push and Shove finds the band more as a dance group than a band. New No Doubt might not have you reminiscing about your first crush as before, but that;s only because you'll be completely in the physical sphere on the dancefloor, where introspection is one million miles away, even if it's right there dancing two feet in front of you.