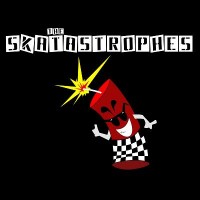 Max Stern may not be a household name, but many of you know his main band these days, Ohio's Signals Midwest. Like so many otherwise reputable musicians, Stern has a, dare it be said, checkered past. Yes, friends, in the long forgotten days of 2007, Stern fronted a third-wave ska band, the Skatastrophes.

To the band's credit, they play a set of solid third-wave tunes that wouldn't sound out of place opening at a Mighty Mighty Bosstones or Reel Big Fish show in the late '90s. If one of these songs were to sit on a mix alongside Edna's Goldfish and the Scofflaws, a listener wouldn't begin to expect that the song was written and recorded 10 years after the genre's commercial peak.

Signals Midwest fans looking into Stern's earlier musical forays will instantly recognize his distinct voice, and while his lyrical style is still developing, there's promise here. And a healthy dose of self-deprecation, such as when he notes in "It Never Ends" that he only has "four chords and a stupid ska band."

The band drops the overt ska at a few points, like on the beginning to "Hang on For Dear Life," which kicks off with some horn-free punk riffing, and offers a slight glimpse into what's to come. On the flipside, there's "Down For the Count," which bears a resemblance to the work of one Tomas Kalnoky on the first Catch-22 album.

It's perhaps unfair to compare this record to the frontman's later music, since they're of such different styles, but having that connection, such comparisons are inevitable. Signals Midwest fans could find this to be an interesting artifact. Fans of ska still holding a torch for the third-wave ska-punk will find a fairly enjoyable record, particularly if those fans really enjoyed Streetlight Manifesto's Everything Goes Numb. There's nothing particularly mind-blowing or genre-defining here, just a solid, competent set of songs.

No Doubt: Push and Shove