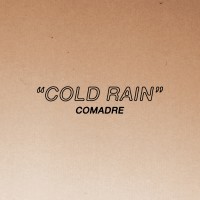 It has been three years since Comadre released anything close to resembling a full-length. But, even without a full-length the boys of Comadre have given fans a steady stream of new material, with two mixtapes and a split with Glasses. While all those releases are absolutely respectable the Cold Rain 7" gives the first glimpse into the self-titled full-length the band has been hammering away on for most of 2012 and oh, what a glimpse.

The 7" features an A-side of the band's upcoming self-titled release ("Cold Rain") and two b-sides, one outtake from the session ("Too Much TV") and one of the band's songs off Mixtape Vol. V ("Free Based"). While "Free Based" was one of the highlights of their recent output (blending the band's ability to mix frenetic dance with crushing choruses), the two new tracks are really where the money is at. "Cold Rain" starts with an intertwining of Juan Gabe's searing vocals and Steven Shirley's bassline over Wes Elsbree's pounding 4/4 drumbeat. The song builds off this pattern, adding guitars until about the 1:20 mark when everything pauses and explodes forward in a move that sends all aspects of the song out to new heights, the song waivers like a stack of blocks but never quite collapses. "Too Much TV" hits much closer to the band's traditional hardcore roots (think Kid Dynamite). It blasts out of the gate and doesn't seem to want to slow down, even if it needs to just to catch its own breath. Even when the guitars slow down and Gabe calms his voice enough to wail, "We've lost control / We've lost control," Elsbree can still be heard playing a rapid fire drum roll, as if to indicate the song won't stop until they can physically no longer play it (a fitting style for anyone who has seen Comadre's live shows).

While it may only be two new songs and just over six minutes long, "Cold Rain" is exactly what a teaser 7" should be. It gives you an idea of where the band has been ("Free Based"), where they're going ("Cold Rain") and what they made along the way ("Too Much TV"). For fans it's a chance to get excited for an upcoming full length. For new listeners it's a chance to hear a band who produces b-sides better than a lot of bands leading singles.

Luther: Let's Get You Somewhere Else