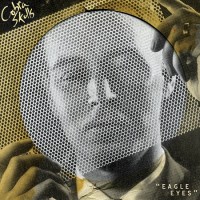 Back when Sitting Army was released, the thing that made Cobra Skulls stand out above the rest of the Red Scare roster, to me, was their weirdness. They were some sort of pop punk band, but they had all sorts of other shit thrown in to keep everything interesting. With their first full-length for Fat Wreck Chords, Agitations, the band came scarily close to releasing a straight-up pop punk record. I was still a fan, but was worried about the direction the band was headed. Cue your "I Used To Like Them When They Put 'Cobra' In The Titles" jokes.

Cut to the present and Cobra Skulls have released the Eagle Eyes 7". There are only three songs on here, so there isn't much room for diversity compared to, say, the 17-track American Rubicon. However, while two of the three songs still fall fairly clearly within the boundaries of pop punk, it sounds like Cobra Skulls are back on track.

Eagle Eyes opens, fittingly, with "Eagle Eyes." It's a bit of a heavier track, though still poppy, and Devin Peralta's vocals have never sounded so good. The opening lines are sung with just the right amount of twang, a few lines are sung with a slightly raspier, gruff voice and the song's chorus will get stuck in the listener's head almost instantly.

On the b-side, the band mellows out for the just-one-minute "Internal War," which finds the gang playing an alt-country-influenced tune. Bringing the loud punk rock back, "Walk Away" closes the release with guitar riffs and a driving beat while showcasing the often overlooked ability of Cobra Skulls to not only write political or socially conscious songs, but to become personal at times too.

Everyone is bringing their A-game on this release, including the producer who made things really pop. While Cobra Skulls have come a long way from singing about Donald Rumsfeld molesting them (probably for the better), they've shown they can still keep things interesting musically and cover subjects more diverse than the myriad of political topics they're known for. Despite a lack of reggae influence or bilingual lyrics, the band does just enough on this release to make it clear that this is Cobra Skulls. They are still moving forward and still keeping the audience on their toes.