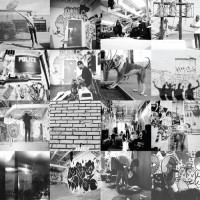 Let's talk about Trash Talk. Everyone loves Trash Talk, right? The Sacramento, Calif. band is on their seventh year as a torrential hurricane of hardcore releasing either a single, EP or studio album every year since their inception, and for this reason they're a band that's hard to ignore in any facet. With the arrival of last year's breakthrough Awake EP, released on True Panther Sounds, came a change of pace of sorts for the band, with the tracks becoming noticeably sludgier, which in many ways expanded the band sonically, giving them a crisper sound and letting the bong do some of the talking. Their latest album, 119, continues Trash Talk's tradition of carrying the hardcore torch that's been burning for 30-plus years now.

The album opens up with the two-minute-20-second track "Eat the Cycle" and doesn't let you up till the album's done closing a mere 20 minutes later. What makes 119 such a great album is that Trash Talk have the formula of "if it ain't broke, don't fix it" and they've got this down perfectly. There is no need for this band to expand, but they have anyway and with tracks such as "Thanks, But No Thanks" they do just that. On "Thanks," the thundering guitars recall a sound unheard of by the the band before, with a sound reminiscent of Nacthmystium in only the most superficial of ways, and it's perfectly alright. Then there is the obvious stand-out track "Blossom & Burn," which features Hodgy Beats and Tyler, the Creator of the infamous hip-hop crew Odd Future.

In the wrong hands the mashing-up of hip-hop and hardcore could have gone horribly wrong, but due to the already abrasive nature of Odd Future's music the two mesh together perfectly. Hearing Tyler's baritone voice rhyme over the sludged out guitars works brilliantly,and the idea of Tyler, the creator doing a whole album sounding of this is incredibly enticing. During the album's short 14 tracks we are lead through a veritable history of trash talk, each track sounding as if it'd be at home on any of the band's other fantastic works, and that's what makes the album such a welcome listen. It's as though the band has assembled a greatest hits for songs you've not even heard yet.

With 119, Trash Talk aren't trying anything new, but that's not the point. This isn't music meant to expand on the lore of hardcore, it's music that's meant to keep the embers of hardcore burning, and with a band like this it's burning a bit brighter.

Chuck Ragan / The Camaraderie Collective: The Road Most Traveled [book]

We Are the Union: You Can't Hide The Sun