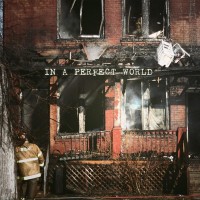 Slaves to the Pavement

In a perfect world all records would be great and there would be no need for critics! Well, I'm sure we'd all get extremely bored with such a world and therefore we should embrace the diverse musical experiences at our fingertips allowing us to test many musical waters in finding bands. Sometimes we find ourselves in awe of a band that in itself is able to offer up an assortment of musical treats for our listening pleasure whereas at other times all we want is one idea, one delivery with one outcome. Slaves to the Pavement do not fit into either box and to their credit do try to bring more to the fore than a one dimensional delivery, although the results are perhaps not as they had hoped.

However, that being said, the album kicks off in fine fashion "Testify," displaying some chunky hardcore that has moments of Dag Nasty and, to a lesser extent, Heckle, at times but with a much bigger sound. Throughout the album there is a lot of guitar work taking place and on the whole I'd say that although there can be a fine line between too much and too little, Slaves to the Pavement manages to just about straddle the fence in getting a balance that is interesting without being overly intrusive to the detriment of the actual songs.

"Agrophobic Dreams" continues that big, thick melodic hardcore approach, although this time I would add both Eleventeen and Slap of Reality to the Dag Nasty comparison, for at least the moments when the vocals go closer towards singing rather than shouting.

In fact, this effective method of attack keeps up for the first part of the album and to be fair, the band does a fine job in maintaining my interest levels whilst this is the case. With "Furthest of Friends" the pace is slowed down a bit but the guitars still retain that Brian Baker-like dimension, and the song offers up something a bit different with moments of melancholy. In "Grow On" the foot comes off the gas a touch more and to my ears the track clearly marks a sea change in the songs on the album.

Up next is the nattily titled "Late Nite Gun Fight with Jimmy Fallon" which I find to be quite incongruous in comparison to the majority of the record. I could be totally wrong but there is something about this song that I am struggling to get my head around; it doesn't fit and it makes me think that it has been shoehorned onto the album for some reason. The final two tracks, "Breakdown Billy" and "Rotting on Carousels with Clones," bring things back closer to an even keel but each lacks the quality that the opening tracks have.

In a perfect world this would be better suited as a five- or six-track EP and such a release would probably get a four out of five star review from me. However, as a long-player, this has its flaws and for me that would be the unevenness of quality. Perhaps if the sequencing had been different it might have not highlighted the weaker tracks as much, almost allowing them to hide away a bit in between the better songs. With the stronger songs all bunched at the start, In a Perfect World tails off quite dramatically and that is to the detriment of the album as a whole. All that being said, there is enough here to enjoy and half a good record is better than a bad record.