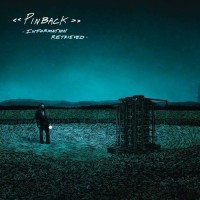 Pinback, less a band and more a rotating cast of supporting players for Rob Crow and Armistead Burnwell Smith, has always been a group that seems to be on the brink of something great. Their distinct sound, which features signature guitar work that lands somewhere between Built to Spill and Cap n' Jazz, breads individual songs that can split your wig, but its albums always tend to falter under too much of the same thing.

Information Retrieved, the band's new album and its first one since 2007, starts out so strong that it almost seems like Crow and company have figured it out. "Proceed to Memory," with its mid-temp pace, alternatively spacious and urgent guitars, driving drums and shout-along vocals, is the band's most self-assured song since their mid 2000s output. Second track "Glide" doesn't reach the same heights, but it gets a lot of mileage out of an emo-touched tapping guitar line that serves as the track's spine.

Things drop off from there, unfortunately. Nothing on the album is an outright failure and later cuts like "Denslow, You Idiot" and "True North" recapture some of the album's early excitement, but "the Pinback Problem" persists: the band has a handful of great tricks, but it can't help but use them to the point of exhaustion.

If you really want to, you can pick out major differences in tracks like "His Phase" and "Deminish," but listeners would be hard-pressed to tell the middle of the album apart in a blind taste test.

The world is better with Pinback in it, especially when the band makes songs as great as "Proceed to Memory." Information Retrieved is a strong addition to an interesting catalog. Hopefully, fans won't have to wait another five years to see if the band can make the leap.

A.C. Newman: Shut Down the Streets