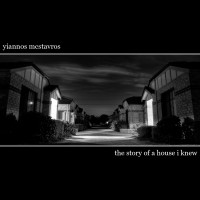 Yiannos McStavros (from Perth, Western Australia) offers up his first album of sorts in the form of The Story of a House I Knew. The songs are just McStavros and an acoustic guitar and sound like they were recorded in his bedroom on a rainy day. That's not to say the songs are bad, just that the recording is a little underdone. If you can get past that then you're in for a nice batch of catchy acoustic pop songs.

McStavros does not shy from his roots or his accent and his thick Australian mid '90s skater punk type sound (at times reminiscent of Jay from Frenzal Rhomb) is refreshing in the current climate of "singer-songwriters," but if you want something that sounds just like everything else you're listening to at the moment then this isn't for you.

Nine tracks that come in at under 20 minutes is about right for this bloke as well. You're not left feeling short changed or like you've been listening all day, especially with the quality of the recordings.

"The Ballad of Campion Avenue, Part I" opens the record well and showcases his lyrical ability well while being accompanied by a simple, catchy tune. Jammed between this and "Part II" are four songs shorter than a minute as well as three more lengthy tracks that at between twp and three minutes would be associated with a standard singer songwriter type length.