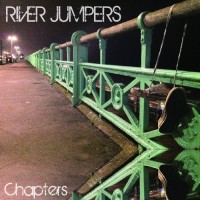 It would be fair to say that the U.K. has upped its game over recent years in providing more and more bands that can match and exceed music provided by its counterpart on the other side of the Atlantic. Here is one more example of that with Brighton's River Jumpers taking its first steps into the world of long players having released a damn fine EP earlier in the year to mark their first recorded output.

This is top notch up-tempo melodic punk rock laced with more ebullience than most bands can manage over a whole career. In fact, in the more defined genre of melodic punk rock, there are few bands that can top this lot, with Timeshares and the Woahnows being two of the few that come to mind, so you can see that River Jumpers are already in good company. The 10 tracks that make up Chapters really race along, being guided ably by the four chaps to ensure a consistently strong album. It's not all boys' fun though as "Five Doors Down" includes some quest vocals by Iona Cairns of the Great Cynics, and this proves to be a highly boisterous favorite of mine with a great sing-along chorusâthe best track on the album possibly.

In terms of matching good music with strong lyrics throughout the album, my favorite example is found in "Coffeeshop Revolutionaries," another exercise in writing a high quality three-minute song, and something that it's always worthwhile reminding ourselves of:

"It's a good life when you question everything,
That includes your own beliefs and those of your peers,
They don't have to be revered, just because it seems logical doesn't make it true."

Despite the obvious enthusiasm and bounce that is evident across the record, even when there is a slowing of pace as on the final track "Strength of Ten," there is still a perceptible spirited quality that, in this case, is at odds with the content of the song itself but maintains the brightness that River Jumpers deliver.

One of the other things I like about this band would be the vocals of Nick Davis, who provides an undoubtedly British sounding performance which is distinctive and pleasingâthis is yet another factor why this release stands out as much as it does.

There have been some very good albums released by U.K. bands this year but I do think this one tops the lotâit's not got a stinker among the pack and it really does provide me with a sense of cheerfulness that is impossible to ignore and why the hell should I, or anyone? This is an album which has a timelessness to it and every time I play it I end up smiling in the knowledge that this is a record that will never fail to deliver when I listen to itâI would expect this to feature in my top 10 of 2012. Do yourself a favor and check it out on Bandcamp.

Yiannos McStavros: The Story of a House I Knew