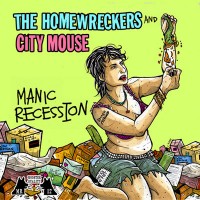 Fledgling label Mooster Records delivers a four-track split EP featuring two bands that I'd heard of but never previously heard. The Homewreckers are notable for including Cristy Road in its ranks as singer and guitarist, she of a lot of punk rock artwork that is found within "the scene" and whose work is to be found on the cover of this record. Second up is City Mouse, another female-fronted band yet one that isn't a carbon copy of the Homewreckers, which is a plus point on the first (and subsequent) play, and one that many people rave about.

The Homewreckers take a more snotty approach to the brand of poppy, melodic punk that is delivered and the thing that grabs me more than anything here would be Road's vocals; they have a quality of "what the hell, my voice isn't the greatest but who cares?"Â and I always find it refreshing to hear a band that is just doing its stuff without seeming to worry about everything coming across as what many would view as "perfect." Both tracks,"Nervous Wrecks"Â and "Uncontrollable DelayÂ," have a great guitar sound and the vocals go a long way to making quite a distinctive output.

The intro of the first City Mouse track, "Gemini,"Â catches me slightly off guardâit almost sounds like something that No Future Records would have released back in the early '80s, a bit like the Violators maybe, although in this day and age the bass playing offers more to the music than many of those older bands would provide with four strings. In fact this song really does take me back to my mid-teens on each listen and I'm not sure if that's why City Mouse are my favorite band on this single but there seems to be a bit more that gets me going in terms of the songs on offer. "Jughead Jones"Â maintains the momentum provided by "Gemini"Â although it is a shorter, snappier affair. With the delightfully named Miski Dee providing some wonderfully soulful vocals, resonating with a deep quality along the lines of Carrie Akre (Hammerbox/Goodness), over a great guitar sound and a rhythm section that drives the songs along with a snap and a bounce, these two songs certainly manage to stick themselves firmly in my head. I must add that this isn't really much like UK82 genre but I still get that impression every time I listen to "GeminiÂ."

This is a strong release, and one which is sending me in search of more music from both bands, although it will be City Mouse that I'll be on the trail of first.

Self-Evident: We Built A Fortress on Short Notice