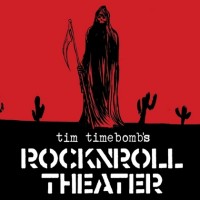 Say what you will about Rancid's Tim Armstrongâ¦no go ahead and say it, you are probably rightâ¦but the man isn't afraid to take musical risks. Sure, he put out a record with Skinhead Rob and rapped about how some of his friends sold records and some sold drugs, but he also helped Jimmy Cliff put out his best record in about 20 years. That's why when Armstrong announced the release of his musical, Tim Timebomb's RockNRoll Theater it might have sounded silly (particularly in the aftermath of American Idiot) but it was artistically ballsy as well. To Armstrong's credit, it mostly worked. Likewise, Armstrong's second solo album, Tim Timebomb Sings Songs from RocknNRoll Theater finds Armstrong covering the tunes he wrote for the musical and taking musical risks that are more successful than not.

For the most part, Tim Timebomb Sings is rooted in classic Rancid three chord street punk. Songs clip along at about two minutes, 30 seconds with snappy choruses. Most interesting is that while this album follows Rancid's worst release by far, the songs here are simpler, but simply put, much better compositions. The riffs are snappier. The songs are more energetic. The lyrics are more memorable. In many ways, this LP simply should have been the last Rancid album.

Still, Armstrong does take some interesting detours. "No Reverence" is backed by a soul choir that sounds like it could have come from Norman Greenbaum's "Spirit in the Sky." "Justice Tonight," a laggardly ska number, could have come off Cliff's Rebirth and features sultry female co-vocals. No lie, but "No More Living," with its distanced soft background vocals and muted, Western-funk strings, could have been a Kenny Rogers tune. And you know what, it works.

But, while the experiments work, one almost wishes Armstrong could have been more extreme. The songs are all rooted in nearly the same mid-tempo with the sole exception being "Let's Fuck," with its short running time and hardcore riff, seems to remind me of another song that I just can't place. All of these songs sound like Armstrong recorded them sitting down. The execution is fine, but the laid-back atmosphere of the songs hampers the harder edge that many of the songs have. Similarly, Armstrong's voice seem to be the most reserved to date. In fact, on "We Did Alright" it almost sounds like he has a cold. Hopefully Armstrong isn't losing his voice, but the constant smooth (smooth for Armstrong that is) delivery on every track takes out some of the bite. With just a bit more juice, some of these songs could storm like Rancid 2000.

If anything, Armstrong again exhibits that he understands the DNA of classic rock and roll and almost effortlessly writes songs that are classic sounding, but not route. Meanwhile, Lars Frederiksen's Old Firm Casuals are kicking out seven-inches that have some rampagingly great licks, if somewhat silly lyrics. So, if both Rancid poles still have the goods, that begs the question, why was Let the Dominoes Fall so bad? It's mystifying. The delivery here suggests that the band might not want to perform as hard as they used to in the studio, but the song composition suggests that if actually do put in the elbow grease, another classic is but two minutes, 30 seconds away,