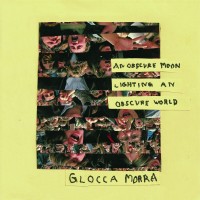 Soon enough in proximity for this extended play to be considered a honeymoon soundtrack in the wake of Just Married, Glocca Morra have abandoned their pensive musings for something more party-oriented, taking cues from acts like Bomb The Music Industry!. An Obscure Moon Lighting An Obscure World is an act of proliferation, continuing to solidify the band's effort to shape the more emotive aspects of the DIY punk scene. The aggression works through the verses, but the lingering and often stale notes of the choruses tend not to vocally impress.

By the midpoint of the release, the action hasn't waned, and on display are tendencies that play out like a well-rehearsed Bridge & Tunnel. The hallmark sound of Glocca Morra ultimately is the candid expressionism and earnest swagger, and it's a proven way to attract a DIY punk audience; however, the ugliness will only do just that. Without true playability, Glocca Morra won't push forward to larger musical audiences or more ambitious artistic authority–the glass ceiling of the basement.

While Glocca Morra opt for a tonal shift throughout An Obscure Moon that keeps them interesting, without embracing aspects required by more moderate (mainstream) listeners, Glocca Morra rapidly approaches a crescendo, one that resembles backing into a repetitious corner. Admittedly, the character explored in "Deep Pocket" offers an expansive personality, but serves up only an appetizer to the sort of wrought love that would do well subsequently as a blood flavored lyrical entrÃ©e.

Glocca Morra again prove themselves to be musically and thematically proficient, and An Obscure Moon ought to be all anyone who frequents Buzznet dot Org needs in a release. The group must now confront the law of diminishing returns as fewer alternatives for reinvention threaten future releases and opportunistic progression.

It would serve not only the group, but also humanity for this ensemble to broaden their horizons and audience–shy of the introspectively-made-conscious decision to do so–in other words, to advance their listenability through more attentive songwriting, groomed production, and enhanced delivery–all things that will come naturally in the healthy marriage of credibility and aspiration.