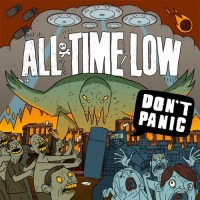 Hopeless isn't just the label; it's also a description for the record. As for the album title, I'd have panicked had the album been decent because that would have been fucking unexpected. There's always "hype" with All Time Low and surely everyone, well almost, knows their name and their sound, and chances are, they won't have good stuff to say. Punknews' community never spares the rod on this band and this album is another reason why. It's that woeful.

ATL focuses way too much on the pop aspect than the punk, to the point where it's sickening and akin to if Fall Out Boy fucked Justin Bieber, who then fucked Maroon 5. Yeah it's that bad. I don't know if they went for style over substance but this album lacks imagination and creativity, with god-awful preppy 10-year-old kid lyrics and YouTube animated videos that are beyond repulsive. The overdose of teeny bop pop makes songs like "The Reckless and the Brave" and "Somewhere in Neverland" seem catchy until annoyance. It's even worse than Boys Like Girls.

ATL never lost the plot, cuz they never had it in the first place. "Outlines" and "For Baltimore" are examples of the utter crapfest endured here. There are just too many awful songs to list with trite and prepubescent vibes that constitute one of the most disgusting records this year. Bayside's Anthony Raneri lent his voice on the okayish "So Long Soldier" and while "If These Sheets Were States" and "To Live and Let Go" try to resuscitate the album, there's just too much shitty music to salvage. You can't do damage control when an album's this bad. It's not humanly possible.

Edna's Goldfish: Before You Knew Better