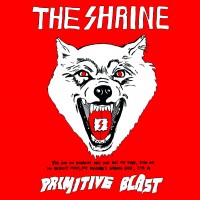 Plenty of bands namecheck Black Flag as an influence, but the Shrine are one of the few to see that worship pay off directly. Chuck Dukowski himself has produced songs by the band and been a big champion. Of course, it helps the band can actually play. Primitive Blast finds the Shrine ripping through blues-indebted hard rock/hardcore with great success. Sure, the style has been done plenty of times before (Bits of DNA come from Mudhoney, Black Sabbath, Big Business and definitely the Stooges) but this kind of music is too primal to deny.

Minus the six-minutes-and-change closer "Deep River (Livin' to Die)," these tunes could be fired off in any order and still decimate. This is frills free rock ân' roll, and both the songwriting and production depict a band in full on party assault mode. The strongest song of the bunch is unquestionably the title track, if only because shouting "Primitive blast!" over proto-punk just makes too much sense.

But really, all of the songs are winners. The only major drawback is that, well, this here tried ân' true formula doesn't leave much room for reinterpretation. While the Shrine doesn't sound exactly like Black Flag, they definitely fit neatly under the Stooges banner, and that's a big band to go up against. Doesn't take away from the Shrine's good time vibes, but does kill off the record's need to be heard a little bit. Still, all the same, Primitive Blast is a total party rocker, and yet another successful notch in the legacy of the style.