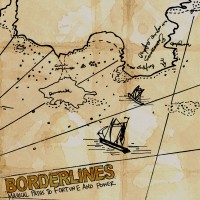 Magical Path To Fortune and Power (2012)

Before they ended their tenure, they were still making pretty good music. Now, the remnants of the Leftovers decided that they weren't finished just yet and their first EP as Borderlines. Magical Path To Fortune and Power offers a huge shot of infectious pop-punk with catchy choruses, melodic hooks and some pretty impressive drums.

The only problem is that with six songs, the tone becomes a bit too familiar as the record struggles to differentiate itself track-by-track. Don't get me wrong, the songs are decent...very decent...but when you listen to six of the same jaded, pop-punk beats one after the other, it gets a bit routine. That said, what the guys have done here is a win for the pop-punk genre and with near-impeccable vocals. Fans of this EP should hope for news on a full-length as soon as possible.

They really reminded me of the good days of the Warped Tour, namely 2002 and 2004, with an influx of anthemic pop and harmonic punk in songs such as "Over-Extended" and "Spotlight." There's a catchiness spread throughout with the enjoyable "Flux Capacitor" and "Price of Admission," continuing to show the vocal prowess amid the cheeky musical deliveries.

I'd have liked a tad bit more versatility and range on the record, but I guess if you're strong at something, stick to your strength. The romantic effort of "Whirlwind" and the most outstanding "Circles" add to the potency of the album and shows that there's much promise if Borderlines elaborate on these six songs. Borderlines definitely have what it takes to carve out a strong name for themselves.