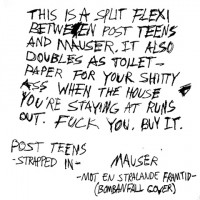 With the Fest yet again descending upon Gainesville, there have been plenty of releases to mark the occasion. Most of them have been label comps, but Florida acts Post Teens and Mauser went for something a little more special: Limited edition flexi-disc featuring a new tune (well, a cover in Mauser's case) from each band. There are two chances to grab this baby, either on Friday at the Sound Study Recordings table in the Flea Market during Fest registration or at Arrow's Aim Records all weekend.

This thing is so short I'm glad it's a flexi instead of a 7". Post Teens' tune "Strap In" clocks in at 49 seconds. A significant departure for the group, it's not particularly sludgy, but rather more of a lo-fi punk smasher. It's super short, but Post Teens have never been known for lengthy statements.

Mauser's cover of bombanfall's "Mot En Stralande Framtid" isn't that much longer at 1:16, but even in its brevity the band packs a bunch of different movements, jumping from black metal to thrash noisecore, as if each chord change requires a new style. It's awesomely disorienting. So while the whole affair is a brief one, collectors ân' fans should still be mighty stoked on this split.

The Mob: Live in Oakland

Converge: All We Love We Leave Behind