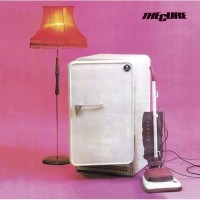 Conventional wisdom says an album without "the hits" should be weaker, but in the battle of the Cure's Three Imaginary Boys vs. Boys Don't Cry, one finds a pleasant surprise. For us Yanks, Boys Don't Cry is the Cure's debut, a tightly wound post-punk/new wave set boosted by hits like "Boys Don't Cry," "Killing an Arab" and "Jumping Someone Else's Train." But it's actually a hodgepodge of singles mixed with the tracks from the band's actual debut, Three Imaginary Boys. But that record, in its undiluted form, is actually the superior spin.

By the band's own admission, the Cure's very early singles, while instantly poppy, had a saccharine quality that wears off after too many listens. Three Imaginary Boys doesn't have that problem. Rather, it's all dark guitar tones and halting imagery. If anything, this record provides a better line through the Cure's discography up through Pornography. Tunes like "Another Day" and "Subway Song" pack a vaguely psychedelic haze, as if the tunes could sputter out at any time. This is made most clear on a cover of "Foxy Lady" by the Jimi Hendrix Experience. While the band's playing isn't quite technical enough to match where they would go, this record still catches them emerging into their own.

One thing that was already in place, though, was Robert Smith's lyrics. Early Cure is notable for a lack of love songs, and Three Imaginary Boys certainly matches that description. Heck, songs like "Object," "10:15" and even the humorous "Meathook" reject love. "You're just an object in my eyes," he spits. While that loathing would soon be taken to greater, darker heights a few years later, Three Imaginary Boys is still a knockout from their early years.

Over the last eight years or so, the Cure have been steadily re-releasing their catalogue in remastered form, with a disc of rarities added on. Most of them are unnecessary, but Three Imaginary Boys is the one that actually works as a double set. The original finally gets a U.S. release, and the bonus set includes demos with alternate arrangements that actually sound cool. Of particular interest is the keyboard-only version of "10:15 on a Saturday Night" and a rough cut of eventual single "Jumping Someone Else's Train."

Converge: All We Love We Leave Behind

Angels Heart: Our Own Road