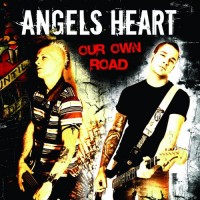 If you didn't like Sixty-Eight Cutlass then this isn't the record for you. It showed that there was potential for Angels Heart with catchy punk songs and a sense of rebellion in them. That said, this new record, and wow did they take fucking long to drop it, doesn't expand on that potential much. It just offers more glimpses and insight into what Angels Heart could truly offer if they just cut down from 14 tracks and focused on removing the filler that they've placed on this new LP.

Fourteen songs is a lot these days. But the thing is, there are too many songs that sound the same here. "Under The Black Light," "Coming Clean" and "Learn to Live" exemplify this problem. It's a bit disappointing because there are some impressive, bad-ass tunes here such as "Do You Dare," "Only Heart" and "Cigarette." It really would have helped if they formulated a 10-tracker because it could have allowed them the chance to realize that a punk record needs to be condensed into a hard-hitting ensemble rather than boring exposition.

"Freedom," "The Bottom" and "Gamble on Red" show the cavalier nature of the band and reiterate how much potential lies with Bryan Joseph (vocals/guitar/songwriting) and Jeff Ott (lead guitar/backing vocals). "Open Your Eyes" again emphasizes how much the album could have been better had it not been for some really low-key offerings such as "Take You Down" and "Back to LA." I guess their plan to release 27 songs this year really fucked up the structure and spine to this record because anytime it picked up momentum, there'd be an ill-placed track to counter it.

I find it really hard to say again that this is a promising band with potential, because I feel that was the tagline from the previous album. All I can say is don't write them off yet. The standout songs on this record show that they have the capability of a great punk record. It'll just take tweaking and refining to get the job done right.